Dogs can become aggressive because of the behavior of their owners 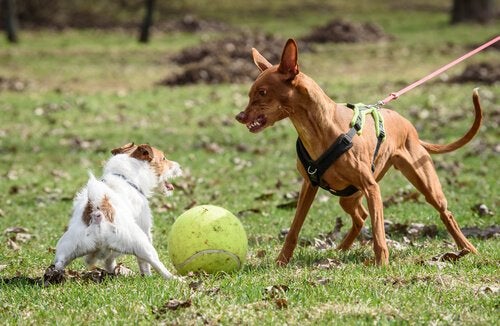 There is a belief that certain breeds of dogs can be dangerous, and even some laws in various countries support this claim. You should know that dogs are most likely to become aggressive because of the owner’s behavior.

Against the theory of potentially dangerous breeds

Save for the exception that confirms the rule, science finds that no one dog breed presents a greater tendency toward violent behaviors, than others.

No matter if you have a pedigree dog or a mutt picked up from the street, if the animal behaves aggressively, the first thing you should analyze is if you have a part in this behavior.

Let’s start from the basis that any dog ​​treated with violence can begin to develop similar behaviors.

Dogs can become aggressive for various reasons. In most cases, the causes of these behaviors are the responsibility of their owners.

Dogs can become aggressive if they receive training based on punishment

In a study published in the journal of Applied Animal Behavior Science, it is pointed out that, for example, dogs can become aggressive if they are trained with methods that include punishment or negative reinforcement.

Thus, this increases the chance of these animals growling or biting strangers. Moreover, they can also show aggression to members of their human family.

Furthermore, an investigation carried out at the University of Florida, emphasizes that although not all breeds behave in the same way, attributing aggressiveness to some of them is inconclusive. And this goes beyond the fact that the size of the dog does influence the damage it can cause if it attacks people or animals.

Other reasons why dogs can become aggressive

The most accurate discussion would be how some dogs can become aggressive, regardless of their breed. But not only a violent type of training can trigger this attitude.

Aggressiveness in dogs can also be due to the daily treatment they receive. Among other things:

Human irresponsibility, the main cause of dogs having violent behavior

If you had any doubt, convince yourself that an aggressive dog usually is a consequence of the irresponsibility of the owner.

Remember that dogs are herd animals and that they act within a hierarchy system. If they do not have clear rules for living, and they are not treated well, then they should not be blamed for bad behavior or any aggressiveness they may develop.

It can be assumed that aggressiveness in a dog is a form of ancestral response to certain stimulus in the environment. Past experiences, the type of training they receive and the living conditions all play a role here. All of these factors depend on humans.

It is another story with those people who deliberately train their dogs to have aggressive reactions for various reasons. But those are topics we will cover in other articles.

Train, care for and love your dog

Therefore, if you have a dog, be responsible for his care and good training. Always look for the positive and respect him for the dog that he is. Do not try to humanize him.

Remember that if the animal becomes aggressive by action or omission on your part, it is he, and not you, who will suffer the consequences. Do not forget that these can range from abandonment to sacrifice.

Socialize your dog, lay down clear rules and, above all, love him a lot.