Why Do Some Female Dogs Mount Other Females? 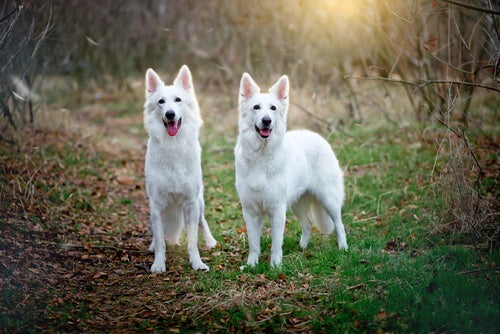 Dogs, like all animals, are very much controlled by their instincts, despite having been domesticated by humans. That’s why many of your dog’s behaviors may seem unpleasant. Nevertheless, everything has an explanation.

The act of mounting is not just something dogs do while mating. In fact, it can reveal a lot about the animal’s health. Female dogs are no exception, and there have also been cases of puppies under six months old mounting other females as well as objects for no apparent reason.

But don’t let this discourage you, because everything has its raison d’être and we’re going to do our best to explain it to you briefly.

If a female dog mounts another female, it could be an indication that she’s experiencing certain levels of stress or anxiety, for example. The first step is to accept it for what it is: female dogs mount too, and there is no need to be alarmed.

It’s Not What You Think

When a dog starts mounting something or someone, there are a lot of possible reasons. It could be boredom or stress, for example. Maybe they’re learning and discovering things about themselves, like teenagers going through puberty. There are ways to differentiate between each of the possible reasons.

One of the simplest things you can do is perform a simple self-assessment of you and your pet’s situation. For example, if you leave your dog home alone for extended periods of time without any toys, he or she may resort to this action, simply to pass the time and deal with boredom or stress.

By doing this, your dog is looking for a way to burn off energy and let loose. If you think that it’s going to be awhile before you get back home, it’s best to take your dog on a nice long walk before leaving.

At the very least, leave toys out for your dog to entertain him or herself with, since this type of inappropriate behavior is likely to happen otherwise.

But Why Is She Mounting Another Female?

There are a number of explanations, and we’ll explain them one by one. To start, though, know that it’s an extremely natural behavior in dogs, much more common than many believe.

Some animals are simply playing with one another when they perform this action, copying what they’ve seen other dogs do. It’s quite common for puppies under two years old, but the problem is that the other dog might not like it and get aggressive.

Males sometimes use mounting to establish hierarchy in the herd, very much like wolves. Dominant females may also do it to establish their position. This reason is unusual, though.

Generally speaking, when female dogs have dominant personalities, they tend to be calmer because they’re sure of their position. The dogs that are the most insecure are the ones who stir up trouble and lead to fighting between the canine members of the family.

Another reason that leads female dogs to behave this way is poor socialization. This happens a lot when animals have spent too much time on the streets, for example.

In any case, if you want to stop the behavior, get your dog’s attention before she begins doing it. Another way to dissuade your dog is to invite her to participate in a different activity — again, before she gets a chance to begin mounting the other female.

This behavior could be warning sign for you, the dog’s owner, indicating a health problem that needs attention. Common culprits are urinary problems or pain in the genital region. If you suspect this could be the case with your dog, see a veterinarian immediately.