Why Puppies Need to Interact with Other Dogs

Although puppies need to stay in a tight-knit home environment during their first few weeks of life, there's a point when you need to let yours explore the outside world. Interacting with other dogs is a big part of that. 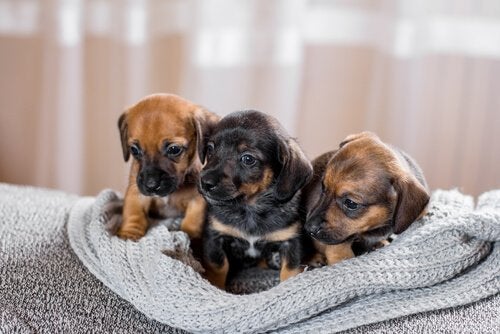 When they’re little, dogs love to play. Nobody would question that. But it’s not enough for them to just play with their owners. Puppies also need to interact with other dogs of their age and breed. Keep reading to learn more about how to socialize your tiny friend.

Is it safe for puppies to interact?

It’s very common for dog owners to wonder whether it’s good, or how good it is, for their dogs to be in contact with other animals. This is even truer when they’re young. The big thing to keep in mind when it comes to this is your puppy’s age.

If it’s a newborn or just a few weeks old, you shouldn’t bring it too close to other dogs or species. You should only ever let it interact with other animals in your house, including, of course, its mother and siblings (if they’re together).

Puppies are very fragile at first. They generally don’t even open their eyes for a few days. They’re also very vulnerable to just about every kind of virus and bacteria. There are lots of illnesses flying around outside, and a potential for other animals or people to harm them.

It’s best to wait a while, maybe two weeks, or until your puppy gets its shots. Your puppy will show you when it’s ready to go out and enjoy life. But how can you tell? It’s simple. Once it starts to move around on its own without a problem, is active enough, and can fend for itself (getting nutrition from dog food instead of its mother’s milk).

Puppies need to interact with other dogs

Your first outing with your puppy should be to a nearby park. There will be other dogs, children, and lots of free space for it to play and interact. Just be careful, because these places aren’t completely safe. There tend to be bacteria, feces, bigger dogs, etc…

That doesn’t mean you should limit its ability to interact with other members of its species, just that you should watch it carefully. So, don’t let it off the leash and leave it at the world’s mercy while you do something else. Keep it close, and bit by bit your puppy will start to approach other dogs and have a great time.

Part of the reason puppies need to socialize is to learn how to behave properly. It also helps them learn how to act in different situations. They’ll start to understand the boundaries of their “comfort zone” (home) and make a case for themselves around their own species.

Puppies need to interact with other dogs. If they don’t, they might develop negative behavior, like aggressiveness, depression, or anxiety. Being in contact with other animals and people outside their home will make it much more likely for yours to be happy.

How to socialize a puppy

Introducing your puppy to the outside world is really important. You should do this at some point between 3 and 12 weeks of age. If you have a small breed of dog, you should also think about what dogs you let it interact with. Bigger dogs could harm it, even if they’re being playful. Also make sure its new friends have nice personalities.

You can also socialize your puppy with a cat, rabbit, or another type of pet you have at home. It’s vital for that other animal to be friendly, calm, and sociable.

It’s also important for your puppy to interact with humans other than the ones in your house, both adults and children. But be very careful with little kids, because they tend to bother dogs (again, even if they’re trying to play), and that can be traumatic for a puppy. The next time it sees a child, it might behave in a dangerous way.

A domesticated dog can live a wonderful life alongside humans, so don’t take that possibility away from yours. Letting your puppy interact with its environment, and be in contact with other animals and people, is the best way to give it a good, happy life. So what are you waiting for, get your puppy socializing!

A Puppy’s First Days at Home
A puppy's first days at home can be a huge change. All of a sudden you have this little animal with a lot of needs, so it's best to prepare in advance. Read more »
Link copied!
Interesting Articles
Sports and Exercise
Agility Competitions and Border Collies