Earthworms play an important role in the ecosystem by consuming the Earth's organic waste, which helps prevent pollution and diseases from spreading. They live in damp areas away from puddles and sunlight. 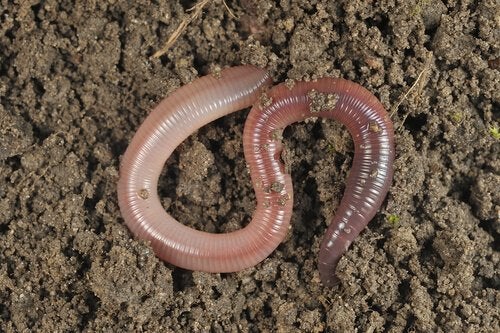 These animals live in your garden, they don’t have eyes or legs, and they move really fast… Earthworms are extremely strange creatures! That’s why today you can read this article and learn some interesting facts about these expert diggers.

Have you ever wondered how earthworms eat and reproduce? Or how they can live underground without having any eyes? Continue reading to find the answers to those questions, along with some other fascinating facts.

You can’t see their mouth or how many teeth they have, because they don’t have any. What you can see is that they eat very well. But how? All they really do is expand their body. These little creatures have a huge appetite, and they spend hours and hours munching on organic waste.

They do this through a kind of bodily orifice that they use like a vacuum. In fact, they can eat up to half their weight in food in just one day! But there’s more, they can process over ten pounds of food a year. They never get tired and they’re always hungry, so their digestive system quickly processes the nutrients they consume.

2. They live in damp areas, but not puddles

Earthworms have to live in damp areas because they breathe through their skin. They constantly need moisture. But at the same time, puddles or other watery areas are deadly to them.

When it rains a lot and their home gets extremely wet, they come out to the surface or go to higher ground. When the water dries up they might go back, or they might just stay in their new home! It all depends on how much food is available.

If they’re in an extremely dry area, they can dig holes up to two meters deep to find the dampness they need to survive.

Another interesting fact about earthworms is that they have non-visible reproductive organs. But that doesn’t mean that they can’t reproduce. They actually do it in a very productive manner. They’re male and female at the same time, so they don’t have too much trouble finding a mate.

They begin to expand the ring around their body, which contains sperm and eggs. They close off that area and a few days later baby earthworms come out! This happens every forty-five days, in case you were wondering how there are always so many in your yard.

One more thing: they can’t reproduce asexual, which means they always need a mate to reproduce.

Likewise, they can regenerate themselves. That means if for some reason they get cut in two, the part with their head will regrow the missing half.

They don’t have eyes, but their skin is so thin that the moment they feel light or heat they have to rush back underground where it’s nice and dark. That’s why when they move around so wildly if you take them out of a flower pot.

The sunlight dries their skin and suffocates them. That’s why they do anything to get away from light.

5. They play a vital role in the ecosystem

Earthworms help create fertile ground, which helps plants, flowers, and gardens grow. Plus, they improve the physical and chemical makeup of the soil and help increase bacteria activity.

They play a part in the natural cycles of carbon and nitrogen in the soil. They compost organic waste, which stops it from ending up in a landfill and causing pollution and disease. A lot of birds eat them, which means they’re also part of the food chain. So let’s be thankful for earthworms and everything they do!