Abandoned Cat Waits for His Owner for a Year

In a small village in Russia, an abandoned cat is garnering the compassion of all of the neighbors, after staying alone for months and continuing to wait for his owners. 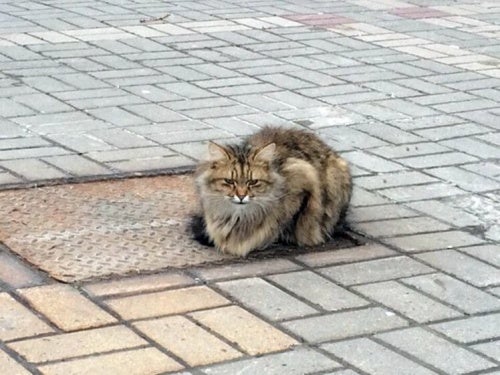 This abandoned cat lives in the Southeast of the former Soviet Union, in Belgorod. These images were shared on Vkontakte, a popular social media platform in the country.

Everything happened starting when the owners moved to a nearby apartment and decided to leave the cat abandoned on the street. After this, the little pussycat ran behind the car, but he couldn’t reach it, and since that moment he’s returned everyday, waiting for his owners to come back. Everyone in Belgorod feels sorry for the feline and have been feeding him since being abandoned.

Similarities and differences between abandoned cats and dogs

As we see, dogs aren’t the only loyal ones and show a deep dedication to humans. Cats, although sometimes the contrary is thought, also show a lot of affection, dedication and sacrifice toward their owners.

We all know that cats are independent animals. They are self-sufficient regarding food. And, they don’t tolerate enclosement. But that doesn’t diminish that the bonds they create with their masters.

A cat can connect a lot of feeling of affection with the person that takes care of him. And, he loves receiving affection. The capacity for affection depends directly on what one does to earn his affection.

There are differences in this sense between cats and dogs. Dogs will love any master, even if the master is bad and even abuses him.

A cat’s love is much more special, as the master must know how to earn it. In this way the pussy cat is only affectionate with people that treat him well, give him food, affection and shelter, and that’s what happens with human beings.

An intense affection from the abandoned cat

Cats may love their owner very intensely. In some cases, abandoned cats die of hunger, once their owner has disappeared.

Cats are brave, and they may risk their lives to help their master. They have a very acute sense of perception, which allows them to detect situations in their surroundings.

How do cats show their faithfulness?

Cats may develop activities and live under the same roof together. In this way they play, interact, fight and love each other, building sentimental bonds. Curiously, the strongest bond that a cat can have is with people. The relationship that these cats can have with their owners is much more affectionate than what they can have between individuals of the same species.

With a sick owner

What are the limits of this solidarity or faithfulness toward people? It’s a very strong bond that ends with the animal’s death. When an owner is sick, the cat is faithful. The cat will try to take care of his most faithful friend, offering mice, cockroaches and birds. As distasteful as these gifts may be, we have to be conscious and value the way this animal is showing love.

In the cases of sickness in their masters, cats stay at the sleeping sick person’s side at all times. He offers company and body heat. If they intuit the lack of movement, they approach their owners and extend their claws near the owner’s face in a loving and affectionate way to get a positive response of movement, in an attempt to provide “life.”

Source of the first image: www.laopinion.com