Adding a Dog into The Family

To introduce a new dog to the family you need to follow a few very important steps if you don't want any problems. This is especially true if the dog has been with another family previously. 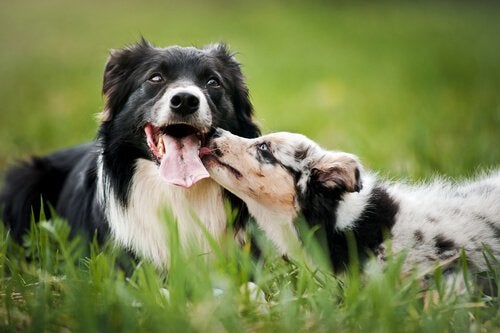 It’s always really exciting bringing a new dog into the home. However, you should hold all of the excitement and remain calm.  Bring a dog into the family is hard work and requires supervision, a lot of patience, and especially a lot of love.

If you’re adopting a puppy, make sure he isn’t separated from his mother until he’s at least six weeks old because at that age the puppy is still developing emotionally and is sensitive. As a piece of advice, it’s a good idea for the puppy to have sporadic contact with humans so they gradually get used to them.

Later on you will need to socialize the puppy with other dogs, animals, and people. This is how the puppy learns his new reality, away from his mother and siblings.

Integrating a dog into the family will be much easier if you stick to some rules. You need to teach them where to sleep, where to go to the bathroom, what time to eat, where he can play and the limits to those games.

If there are larger animals or dogs already in the home, then you should carefully supervise the interaction they have with each other. You need to make sure that they form a good relationship. If they’re both young, try to arrange meetings between them. This will help them interact and play without getting hurt.

The first encounter between your current pet and the new puppy will determine their future relationship with each other. Don’t forget that until that moment, your current dog has been the center of attention.

Socialize From The Beginning

The best way to introduce them to each other is to do it out of the house, on a walk. It’s useful if there are other people, and that each has control of one dog while they smell each other and get to know one another.

Two possible things will happen. Either they won’t pay attention to each other until they finally become familiar with one another. Try your best to prevent them from fighting. If this happens, separate them calmly to lower the tension.

They need to supervised during the first few days. This is especially true during meal times or when playing in order to prevent any conflicts. If your current dog likes to fight with other dogs, then you need to be extra careful and keep a good eye on them. You should respect your first pet’s rules in order to prevent having problems with the new dog.

If you have a cat, then you need to take things a little slower. You can’t force cats to do anything. However, it’s important to know about the dog’s breed and instincts to see how he’s likely to be around a cat.

If you’ve adopted a puppy or an old dog. You need to think about how much time you can spend on this adaptation process. Puppies take longer, but older dogs can’t be left alone right away either. Otherwise, they may develop anxiety, boredom, or stress.

The beauty of the breed or dog are the main reasons for choosing a dog. However, this is often a big mistake because adding a dog into the family can be difficult. Many don’t adapt well to the new family, and people end up abandoning them. Make sure that you have enough time to attend to your new pet, especially if there are children or other animals in your household.

Things to Bear in Mind

When you have a puppy, it’s important to let him greet the adult dog on his own his own free will. Obviously, you shouldn’t let the adult dog intimidate your new puppy. Don’t designate an area for both dogs until they’ve established a cordial and trusting relationship. Until then, it’s best to keep them separated.

Likewise, separate their belongings and designated a certain space for each dog to prevent aggression. Always, break up a fight if one ever occurs. Right from the start, you need to train your dog to eat from his own plate. If he finishes first, then you shouldn’t let him get away with eating from another pet’s bowl.

If you follow these recommendations for adding a dog into the family will be a relatively quick and pleasant experience for everyone.