Have You Heard About the Asian Wild Ass?

The Asiatic wild ass in in danger of extinction 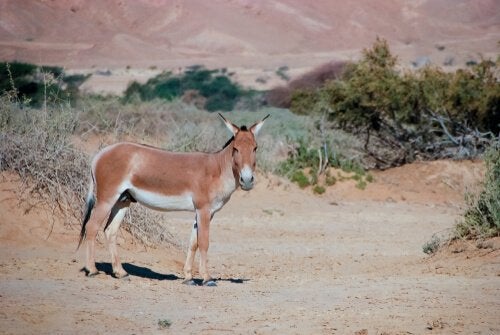 The existence of the Asian wild ass confirms that our donkeys or burros still have relatives in the wild. Similar to the domestic ass, this animal is larger and has far more character.

This species has been with us throughout history and has played a vital role in every part of our planet.

Learn about the Asian wild ass

These creatures are also known as onagers. They are similar to African asses, but with small ears and no stripes. Also, they tend to be rust-colored, as well as other colors.

In spite of their reputation, they run very fast, even up to 44 miles per hour. Like donkeys, their forte is their durability in the desert.

The desert is the natural ecosystem of these impressive animals. As a matter of fact, they are able to go without water for a long time, but not quite as long as camels.

The behavior of the Asian wild ass

The Asian wild ass tends to live in groups of 12, in which a male is the leader of the harem. The majority of the group will be females and the rest of the males don’t reproduce.

Only two animals hunt the Asiatic wild ass: humans and wolves. Humans are their main threat due to them hunting them for their usefulness as domestic animals.

Even though asses are considered wild, the people who live in this area have domesticated them. In fact, they’ve been doing this for thousands of years. This is similar to falconry (domesticating wild animals), which is also typical of the Asiatic Steppes.

In the distant past, this animal lived in Asia for the most part. However, today, many subspecies of the ass are under threat of extinction. The species known as kulan is the one in most danger. This Kazakh subspecies has practically disappeared.  Only three percent survive and it’s in serious danger of extinction.

There are only 4000 asses remaining in Kazakhstan. The majority of them are in the National Park of Altyn Ernal. Currently, a group of conservationists wants to transfer them to a grassland area the size of France. In fact, some have already gone to a new area and the group hopes that they have more of a chance to survive.

Because of this, conservationists want to protect these unprotected species of Equidae. This is why its conservation doesn’t draw as much attention, in spite of the fact that it’s equally important.

Differences Between a Donkey, Mule, and Ass
Although many people confuse them, and talk about a donkey, a mule, and an ass as if they were the same animal, the truth is that there are some noticeable differences between them.  Read more »
Link copied!
Interesting Articles
Mammals
All About the Caracal: Characteristics, Feeding and Habitat