The Behavior of Packs of Wolves 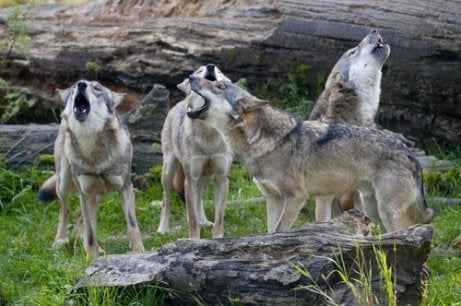 Normally, packs of animals are just animals that travel together in a group. However, important relationships develop between these canines. Packs of wolves have a specific hierarchy. Basically, they need to cooperate to kill their prey.

Not all wolves are the same

Wolves live all over the planet. However, wolf populations are smaller today. This is becuase of humans. In particular, shrinking populations result from conflicts between wolves and ranchers. Due to the tremendous ecological success of the wolves, there are many subspecies. However, there is a majority consensus that there are about 14 major subspecies.

These subspecies have multiple differences. And, because of this a wolf, in the adult stage, can vary in weight from 10 to 70 kg. The great weight variation among the different subspecies is the reason why some of them hunt larger animals.  As a result, they need larger packs to successfully undertake the task.

For example, in the United States, a wolf pack as big as 30 wolves has been seen. Moreover, it is normal for this wolf subspecies to become organized in groups of 20. However, smaller specimens, such as the Iberian wolf (Canis lupus signatus), form packs of a maximum of 7 animals. That is to say that the number of wolves in a pack depends on its subspecies, and it varies enormously.

The myth of the alpha wolf

The general culture tends to explain the social life of the wolves through the figure of the alpha male. This wolf reaches the top of the hierarchy in the pack through demonstrating its physical superiority to the rest of the group’s males. The truth is that among the experts who study wolves around the world, the popular concept of the alpha male is being questioned.

It was David Mech, one of the greatest experts in this species, who coined the term during his first studies in the 60s. And he also now rejects its use. Mech’s studies were based on artificial packs created in captivity, and not in the way that the packs are created in the wild.

Among the experts in this species around the world, the popular concept of the alpha male is being questioned.

According to Mech, it would be much more appropriate to talk about males and females breeding. The leader of the wolf pack is not the one who defeats the rest, rather it is the one who reproduces. In fact, there is not much competition, since the rest of the pack are usually the offspring of the breeding pair.

This means that the packs never stop being a family group. Some parents live with their litter until the offspring are ready to continue their life separately. In fact, the wolves have between 3 and 8 young per litter. This is enough to make up a pack consisting of only its own offspring.

There will be, however, alpha males in the captive groups, where the wolves are not family. In the wild, the alpha male figure can also appear in large packs, as is the case in Yellowstone. To form such large groups, several breeding pairs are necessary, meaning there may be competition between them.

In fact, the wolves have between 3 and 8 pups per litter, enough to make up a pack with their own offspring.

The cooperation within the wolf pack

In large packs, group strategy is key. The wolf will use different strategies to reach the fast mammals that they usually hunt. For example, in summer, they will tend to hunt their prey to rocky areas, swamps or rivers.

In winter, by contrast, the simple presence of a wolf can make a deer nervous enough to get stuck in the snow. These large packs are known to go for large prey, such as the fearsome American bison.

Within the pack of wolves, younger wolves often act as mere observers, to learn. Although there are no established roles, wolves take advantage of their physical differences in hunting. We will see that the females, lighter, act many times directing the stampede. The males, heavier, are usually the ones that hunt the prey once it becomes disoriented. Again, the role of “alpha” is anecdotal. In fact, the wolves do not seem to act under the command of any particular wolf. Everyone knows what to do when the time comes.