Can Dogs Take Medications Made for Humans?

When dogs take medications made for humans, the consequences can be very serious--even lethal. Today, we'll talk about the toxicity of medications in dogs. 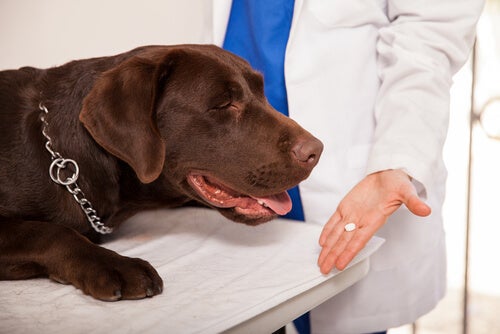 If there’s one thing we’ll never recommend, it’s medicating your dog on your own. Any time you suspect your dog is suffering from a health problem, consulting with a professional is your only option. When dogs take medications made for humans, the consequences can be very serious.

In other words, your negligence could end up costing you a lot more than a visit to the vet. In fact, it may cost you the life of your pet.

While humans are also mammals and our bodies work in a similar way, dogs and animals are also very different. And the side effects that medications produce vary greatly from one species to another.

The toxicity of anti-inflammatory medications in dogs

Ibuprofen, aspirin, and acetaminophen are all medications that you can find in almost every home. They help to calm the effects of mild to moderate pain. What’s more, ibuprofen is an antipyretic, meaning it helps to reduce fever.

It’s common for us to take these medications when we have some mild illness, headache, muscle pain, or the flu. These types of pharmaceuticals are the over-the-counter medications that we can tend to abuse.

Given how often we take them and the fact that they’re always on hand leads some people to believe that they can also use them to treat symptoms in pets. However, their use is extremely dangerous in animals and, in this particular case, can be lethal to dogs.

Medications made for humans exceed the lethal dose for dogs

This means that, if a dog weighing 10 kilos takes one of these pills, it will be five times over the lethal dose. Without urgent medical attention, the animal will likely die.

How do pharmaceuticals act in the body?

The speed at which the first symptoms appear depends on how long the medications take to circulate through the bloodstream and reach the target organ. Normally, pharmaceuticals circulate through the blood until they’re metabolized by the liver and filtered by the kidneys. The time these organs take to metabolize depends on the concentration of the product, among other factors.

The speed of the metabolism of pharmaceuticals is not the same in every dog. In some, metabolism can be so fast that it never reaches toxic concentrations in the blood. In others, however, it can be very slow, meaning even very low or normal doses can produce toxic effects.

There are a number of factors that influence the speed at which a dog’s body will metabolize pharmaceuticals. The principal factors are the following:

What symptoms does intoxication from medications produce?

Some of the common symptoms that result from intoxication are:

NSAIDs also damage the gastrointestinal mucus membrane. That’s because they inhibit prostaglandins, molecules that are responsible for protecting the intestine by producing a mucous that lubricates the surface and reduces the secretion of gastric acid.

What’s more, when dogs ingest medications made for humans, the effects of toxicity can make the original problem even worse. And, as a result, the veterinarian may have a harder time making a diagnosis. For all of these reasons, the only viable option for dealing with any illness in pets is to seek veterinary attention as soon as possible.

Stomach Pain in Dogs: Signs and Symptoms
Stomach pain in dogs can be very worrying for owners until they find out what's causing it. But a painful stomach is quite a common problem. Read more »
Link copied!
Interesting Articles
Animals
6 Animals that Can Suffer from Depression