Current Situation of the Short-Tailed Albatross

Read this article to learn about the endangered short-tailed albatross. It's prized feathers caused it to be extensively hunted in the past. 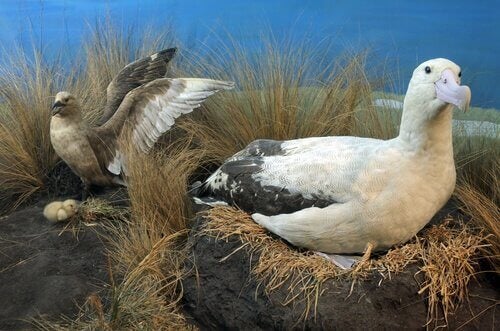 The Industrial Revolution caused the short-tailed albatross to decrease in numbers and become an endangered species. This was due to the value of its useful feathers.

This is a medium-sized bird that’s famous for its large pink beak. Read on to learn about some of the characteristics of the short-tailed albatross, and learn about its current situation.

Characteristics of the short-tailed albatross

The scientific name for this animal is Phoebastria albatrus. An adult can measure up to 34 inches tall, and weigh approximately 22 pounds. The color of the short-tailed albatross varies, depending on its age. While young, as well as at birth, the plumage is blackish brown. Later, as an adult, the feathers are more whitish or golden-toned.

The neck and breast are beige, and what truly stands out is the enormous square pink beak. One way to identify the age is to examine the beak. Older examples of this species have a blue border around it.

As far as diet, the albatross eat mainly squid. It also eats the eggs of flying fish, small fish and crustaceans. There are flocks of this bird that follow fishing boats, in order to feed on the leftovers and remains of fish that are thrown overboard.

An additional tidbit about its behavior is that it gathers into groups annually. This occurs at the time of incubation of the only egg that the pair has. Incubation lasts for over two months. A couple is able to procreate for five to six years of life.

The short-tailed albatross lives in Torishima, Japan, and the Senkaku Islands in China, and also in Japan. In addition, it’s found north of the Pacific Ocean and also east of Russia as far as Alaska.

The past, present and future of the short-tailed albatross

Demand for albatross feathers began at the end of the 18th century in Europe. Likewise, they were all the rage in North America. Due in part to the Industrial Revolution, stylish clothing and accessories were readily able to include these precious feathers.

The outstanding qualities of the feathers include being waterproof, lightweight and providing warmth. Because of this, manufacturers used them mainly for coats or comforters. A bed cover, such as a comforter, requires more than 2 pounds of feathers. One adult bird weighs less than three-quarters of a pound, and so it was necessary to kill several to make one comforter.

Commercial hunting of this bird began in Japan around 1885. A company called Tamaoki was the exporter of the feathers. The company became aware that there were almost no short-tailed albatross birds left nearby. This prompted them to also capture those of the nearby islands.

Other companies did the same thing in Hawaii. However, criticism of the way the Japanese slaughtered these birds soon reached the buyers and governments. So, in 1903, Hawaiian authorities prohibited hunting the short-tailed albatross in its territory. They then declared it to be a national marine treasure.

Even after all of this attention, they continued to hunt them in other areas. In 1930 there were a mere 2000 in Japan. Consequently, they declared them to be an endangered species. The director of the Yamashina Insitute of Ornithology declared Torishima Island a sanctuary for the short-tailed albatross.  And of course, they prohibited killing them.

Researchers began to study the island in 1958 and naturally included this species. Moving ahead, in 1981 the government of Tokyo also carried out varied activities. The support for this wonderful bird allowed for more reproduction in the area.

However, once again the species was declared endangered due to the human presence in the region, and this hampered sufficient reproduction. So they used the technique of placing wooden decoys in the habitats to attract the actual birds. Within a decade, this increased the albatross population.

Today, the amount of birds in the Japanese islands is almost 5000. This is a low number, but it still encourages scientists to continue with their procedures. They conduct activities to aid reproduction in the wild. Unfortunately, the short-tailed albatross is still an endangered species. There is an active effort to keep it and conserve it in its natural habitat.