Dalmatians: One of the Most Popular and Well-Known Breeds

Dalmatians are an active dog to have as a pet and will keep you busy! 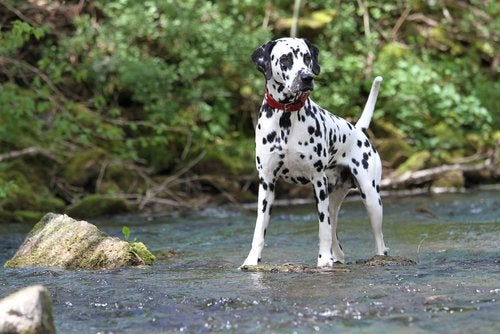 Dalmatians are loyal, loving, intelligent and trustworthy dogs. Equally important, their body is muscular, athletic and ideal for running long distances. They are also prized for their ability to be faithful guardians.

The Dalmatian is a breed that has existed since ancient times. This breed is on frescos from the 17th century, which confirms the belief that its origin is Croatia, specifically in the Dalmatia region. There are even those who believe that the origin of the Dalmatian is even older and from other parts of the world.

It’s inevitable that when you meet up with a puppy or an adult Dalmatian, it’s spotted coat and proud demeanor will mesmerize you. These are positive traits is what makes Dalmatians good guard dogs and companions.

Interestingly, the British aristocracy originally used these dogs as “coach dogs”.  When British noblemen wanted to flaunt their power, Dalmatians accompanied them on their jaunts in coaches. Some people think that their initial function was to chase away the stray dogs from the horses. At the same time, they brought a touch of elegance to the caravan.

In fact, that function continued in spite of the disappearance of horse drawn coaches. They then began to escort fire engines in some countries and eventually began to ride inside these trucks.

Obviously, the main trait of Dalmatians are their black or brown and white spotted coats. Oddly enough, Dalmatians aren’t born with spots, but they appear within their first year of life.

The eyes and the nose of Dalmatians tend to be the same color as the spots on thier coat. The tail, in the shape of a saber, brings an elegance that has the Dalmatian stand out among other dogs. When a dog is healthy, the fur is short and lustrous.

The Dalmatian is friendly with strangers and other dogs. It’s quite rare to see this breed acting aggressively for no reason. Actually, their personality is very calm if they receive proper training and exercise, which is what they need.

This breed is very respectful with children and even shows a caring attitude toward them. Nonetheless, there is no tolerance for ear and tail pulling! That’s why it’s good to teach children the appropriate way to treat dogs so they have a relaxed and tolerant demeanor around children.

Some Health Problems of Dalmatians

This dog breed is prone to disease, due to their blood ties. Their popularity increased with the film 101 Dalmatians, which promoted the indiscriminate breeding of these dogs in order to satisfy the demand.

It’s believed that Dalmatians aregenetically prone to deafness. This conditon appears in about 10% of this breed and is either a partial or full loss of hearing. This condition has nothing to do with the age of the dog; they are either born with or without it.

Dalmatians are also prone to having kidney stones. Their metabolism excretes uric acid via the urine, especially in males. It’s important to pay attention to this condition. Although some cases are mild, others can put your pets life in danger.

Other issues common in this breed are allergic dermatitis and other skin conditions. These conditions include any cutaneous irritations seen on a dog. Fortunately, the majority of these conditions are easily treatable, without major consequences.

The Perfect Owner for Dalmatians

Due to Dalmatians having very vibrant personalities, they like to be outdoors with lots of activities. As a result, this dog is best for the young people who love to exercise, and can include their dog in their exercise rutines.

You’ll see that this playful breed is in constant motion. So if you don’t have a lot of space in your home, you should take them out twice a day.  As explained, this breed is very sociable and appreciates being able to play with other dogs when going for walk.