Dewclaws: Why do Mastiffs have them?

In some cases, dewclaws are useless. However, they can provide stability and help large dogs balance themselves. 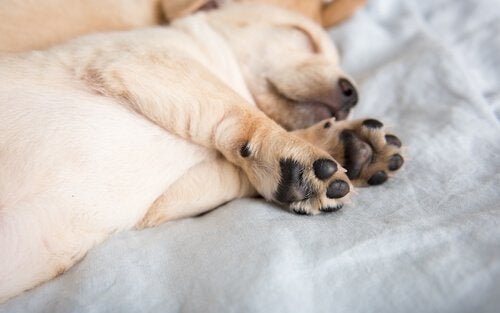 Do mastiffs have thumbs? During the slow course of evolution, body parts adapt and change. However, some parts are stuck in the limbo or remain on the body and are no longer useful. This is much like the dewclaws on mastiffs.

When it comes to useless body parts on humans, consider the tailbone or appendix. The tailbone shows us that maybe at some time in the past humans had tails. Also, the appendix perhaps had a digestive function at some point in the past.

Interesting enough, some dogs have “thumbs” but they no longer need these appendages. Mastiffs still have dewclaws or “spur” that may have had some sort of function in the past.

Domestic dogs have four primary toes on their paws. However, Mastiffs also have a fifth toe on their front legs. It is in the same position that a thumb would be on the human hand. Therefore, this is why some people refer to them as a canine thumb.

This fifth toe is the mastiff’s dewclaw. However, you may notice that while a mastiff is walking or playing, their dew claws don’t touch the ground. So what is this extra toe intended for?

What is a dewclaw for?

A mastiff’s dewclaw has several functions. However, these functions are minor, such as helping then balance while the dog is moving on uneven terrain or coming back onto land after swimming.

The dewclaw gives the mastiff some help and control while grooming, especially when they clean their heads and faces. You may also have noticed that your dog will use his dewclaws when holding on to his favorite chew toy.

What about the hind dewclaws?

A lot of people might think that dewclaws are loose, useless appendages. This small claw on the back of a dog’s leg is the hind dewclaw.

You can see evolution taking place right before your eyes just by looking at dog’s rear dewclaws. All mastiffs have front dewclaws, but their hind dewclaws are genetic anomalies.

The hind dewclaws — if they haven’t been removed — usually appear higher up on the hind legs. These claws are joined to the leg by nothing more than a small flap of skin. They have no bone or ligaments attached to the leg.

As rare as it may sound, there are mastiffs that are commonly born with two dewclaws on both hind legs. In fact, there are some mastiffs where the double dewclaw is not only present but is a standard requirement of the breed.

Getting rid of the hind dewclaws

Like the tailbone and appendix in humans, we only tend to notice dewclaws when they are injured. Hind dewclaws, because they have no real substantive connection to the body in most dogs, usually get things stuck in them.

This can cause the dewclaws to tear, which can lead to bleeding and pain. Consequently, some owners surgically remove them. Getting hind dewclaws removed when your dog is a puppy eliminates the risk of injury later on in life.

Getting rid of rear dewclaws is common, although not universal or necessary from a medical point of view. During a puppy‘s first visit to the vet, the vet can perform the removal surgery.

When done earlier in life, the pain is minimal and the recovery time is quick. Surgical removal of the hind dewclaws at a young age is preferable than waiting until the dog is grown. Waiting means the surgery will be more expensive and painful for the animal.