Did You Know Dogs Watch TV Too? 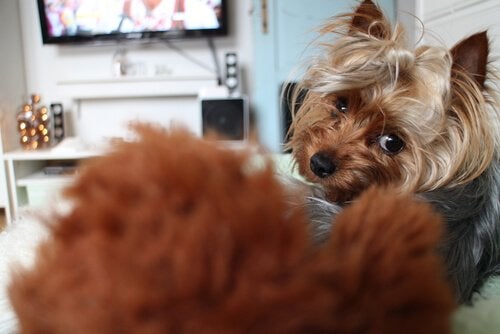 A lot of us see our pets as members of the family. They join us in many of our daily activities, so it’s not too strange to have them sit with us in front of the TV. Although it is scientifically proven that dogs watch TV, the question we need to answer is this: what do they really watch and what captures their attention the most?

A study to find out why dogs watch TV

Scientists from the University of Central Lancashire in the United Kingdom tried to clarify the answer to these and other questions. The investigation revolved around a report entitled: Is my dog watching TV? To confirm that dogs also watch TV, tracking mechanisms were used with very similar methods to what is used to analyze the human eye.

The studies discovered that dogs, just like their owners, are not indifferent to TV programs and that they also have a preference for the type of content that they watch.  Among the conclusions reached by these experts are the following:

How dogs see the world and TV

At this stage, we should remember that dogs see the world much differently than we do. Canine vision is dichromatic because they have two types of color receptor or cones. These cells only capture yellow and blue.

In addition, the eyes of dogs are more sensitive to movement than our own. It makes one suspect that the higher degree of sharpness in current high definition screens is the main factor behind the interest shown by our furry companions. They feel more attracted to the televised images.

The older equipment, by showing fewer frames per second, did not capture the attention of our furry companions. By capturing images faster than the human eye, to dogs TV looked like a Charles Chaplin movie.

A TV channel exclusively for dogs

Interestingly, some of the conclusions that the investigators in the UK reached appear to have been widely accepted long ago by some on the other side of the Atlantic. In 2012, Dog TV was launched in the US. It’s an on-demand channel exclusively for dogs. The creators had the idea to help dogs that are left home alone.

According to those responsible, these programs are tailored for dogs from a visual and auditory perspective. The idea is to stimulate, relax, and entertain them to reduce stress and separation anxiety.

If you would like to take a look at Dog TV, here are some videos available on Youtube.

TV does not replace playing or cuddles

So, if you hadn’t known before, now you do. Just like the other members of the family, dogs watch TV too. This is one more reason to spend time with your pet, and a very welcome reason. But no doubt your furry friend will find little interest in the news or sitcoms unless they have other dogs as actors.

So be careful! Don’t use this information as an excuse to stop paying attention to your dog by turning on the TV to entertain them. TV shows will not replace walks, playing, or cuddling. While dogs watch TV like us, it’s not good for them to spend all day watching it.

All things in moderation.