Causes and Treatment of Feather Pecking in Birds

Feather pecking is one of the most common behavioral problems in birds. Continue reading to find out how to deal with it. 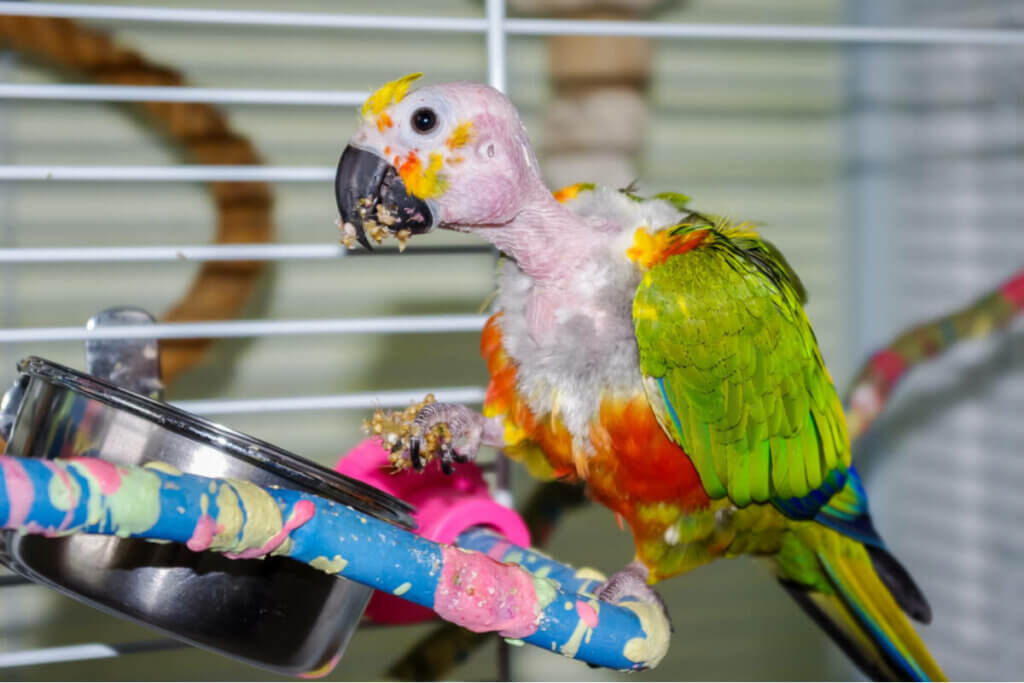 Feather pecking is a common clinical condition in domestic birds. It’s difficult to eradicate and causes many problems, both to the animal and their owner. Continue reading for more details about it and what you can do to deter it.

The following lines are a review of the causes, symptoms, and treatment for this problem. It’s of vital importance to prevent or to know how to treat feather pecking if you have a bird at home as the condition could easily worsen over time.

This kind of itching in birds is a behavioral disorder. A bird with it has a repetitive, constant behavior with no obvious function in which they pluck their own feathers. It differs from molting and other conditions in that only the feathers from the areas the bird can reach with its beak disappear.

The chronic form of this behavior qualifies as obsessive-compulsive disorder. The bird may do it to themselves or to others. This is why it’s important to watch them closely at all times and separate cage mates temporarily if necessary.

There’s a logical way to know who’s doing it to whom. Is the bird missing the feathers from its head?  Their cellmate is the aggressor in that case. This is because they can’t pluck their own head!

Causes of feather pecking in birds

The origin of this condition is birds’ preening behavior. It’s innate and triggered in response to skin receptors – which report that some feathers are misplaced – or by a stress control mechanism. There are four main causes of pecking in birds:

OK, but, how do you detect feather pecking in birds? Just keep reading!

Losing feathers isn’t the only sign that your bird may be suffering from feather pecking. It’s important to be able to distinguish it from normal molting in order to make a correct diagnosis. Thus, look for the following to make it easier for your vet:

What should you do once you identify the problem and its causes? The solution is to administer the necessary treatment if the cause is organic, and the behavior should disappear after that.

Something similar happens when the cause is environmental: the most important thing here is to recognize the factors that are stressing the bird. Some measures you can take are:

Eliminate the presence of predators or other animals. For instance, that magpie who perches on the terrace to watch your canary is thinking up ways to eat it, and your bird knows it. It may also be that your bird is afraid of the dog, no matter how sweet they are.

Measures such as creating a daily routine, improving feeding, and rotating enrichment so that the bird doesn’t get bored should be the most immediate ones to take when the cause is purely behavioral.

In very extreme cases, you can resort to an Elizabethan collar as it’ll impose some physiological limitations and the bird won’t be able to peck their feathers. Unfortunately, this collar is highly uncomfortable and won’t allow them to move or eat at ease.

Homeopathic remedies and acupuncture are the treatments currently under study. Also, acupuncture seems to be effective in some species such as cockatiels.

The importance of asking for help

Birds have complex personalities, so treatment for this type of problem must be tailored to each individual. Consulting a professional should always be the first option when the behavior begins as it’s difficult to diagnose and eliminate completely. Relapses are frequent, unfortunately.

We must conclude with a thought: is a caged bird happy? Sometimes, taking a bird into the home is the best option for them but you must keep in mind that these aren’t domesticated species.

Before sharing your life and space with a bird, try to make sure you have the tools for them to be completely happy and healthy in your company and those around you.

The Most Common Diseases in Pet Birds
Pet birds are intelligent, sociable animals, and they're also vulnerable to common diseases. So, knowing how to recognize the first signs is important. Read more »