Feather-Plucking - My Parrot is Pulling Out Their Feathers!

It's often difficult to diagnose the exact cause of this problem since it could just be a simple cry for attention. However, it could also be a sign of depression, which is common in these birds. 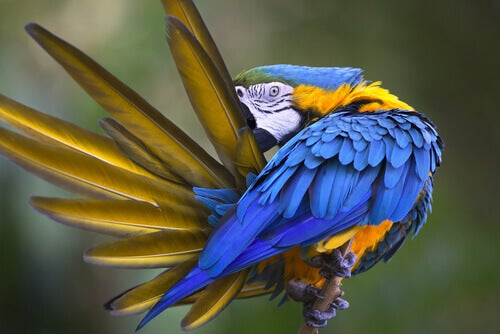 If your parrot is pulling their feathers out or has developed a bald patch, it’s important to get to the root cause of the problem. We know this condition as feather-plucking and it can be caused by a variety of illnesses, circumstances, or changes.

Although feathers can fall out for a range of reasons, such as beak and feather disease, it’s often the case that the parrot pulls their feathers out themselves.

If your parrot is pulling out their feathers, think about their past

Your parrot’s past will tell you a lot about why they might be pulling their feathers out. Their origins are very important and experts have observed that parrots captured from their natural habitat are more prone to feather-plucking.

Although, these days, regulations are tighter, parrots are still captured in the wild. They’re often then provided with falsified documentation for sale on the general market. As a result, it’s really important to go to a trusted breeder.

Parrots that come from animal shelters or that have been adopted are also prone to feather-plucking. Even though it’s always best for these animals to have a proper home, it’s still a good idea for the owners to have experience before adopting one of these animals.

The way you’ve raised your parrot can also be an important factor. Parrots can either be raised by their parents or by humans. Finally, how much you handle them and interact with them can influence their behavior.

Just like primates, parrots establish important bonds during their youth and need to learn many things by following examples. This is why it’s important to look for a responsible breeder since parrots that haven’t received proper treatment and interaction are more likely to pull out their feathers.

Feather-plucking can often be the result of behavioral problems. Depression in parrots is a real thing and could be the main cause, and feather-plucking is a very effective way of getting our attention.

Once a parrot realizes that they can get our attention by pulling their feathers, they’ll do it more often. As a result, some experts recommend ignoring this behavior, but not without first trying to seek appropriate treatment.

They might be crying out for attention because they feel lonely. Many parrots spend long periods of time on their own. This is why keeping more than one parrot or making sure that they have plenty of toys and activities can be a really good idea. Ultimately, a lack of mental stimulation or company isn’t going to make any parrot feel particularly great.

But trying to get their owner’s attention isn’t the only reason for feather-plucking. Other causes can include compulsive disorders, over-dependence on their owner, or even phobias. One of the main methods for addressing this is training by operant conditioning.

Problems with handling and habitat

Their habitat and the way they’re handled are really important for these animals. Keeping a parrot is a very complicated responsibility and they have many needs, which is why it’s very important to think carefully before getting one.

Your parrot could also pull their feathers out because of nutritional problems or underlying illnesses. So, it’s important to take your parrot to the vet as soon as you notice a problem.

But it doesn’t stop there, feather-plucking could be caused by an inadequate diet, the quality of the air, the amount of sunlight they get, whether they get enough physical exercise, excessive sexual stimulation, or even hormonal problems. They may even be pulling their feathers out because of parasites or an allergy.

As you can see, there are many different potential causes for this condition. So, whilst there are many medical products available to try and resolve it, they won’t always work.

The most effective steps will be to consider how you handle them and try to improve their quality of life. By putting their needs first, you stand a better chance of stopping this behavior.