Feathers Can Reveal Diseases in Birds

Feathers are epidermal growths that form a bird's distinctive plumage. They're rather complex structures and can in fact reveal diseases. 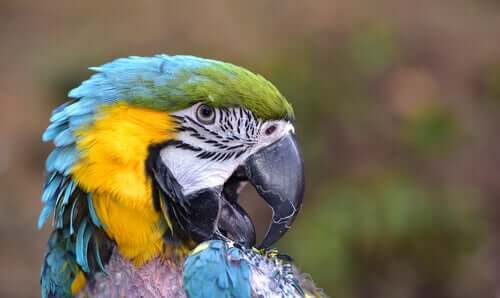 Either due to their softness, striking colors, or the function they fulfill, bird feathers have always been an object of much curiosity for many people. What you might not be aware of is that feathers can also reveal diseases in their bearers.

To begin with, let’s see what role they play in birds’ bodies.

Feathers are an element that differentiates most birds from other animals and they’re configured by a structure that protrudes from the skin. Reptilian scales are its predecessors. At least, this is the hypothesis after observing their similarities in growth and keratin composition.

Birds’ feathers can reveal diseases, among other functions

Feathers originally emerged to help with body temperature control and this function hasn’t changed. However, they also have other functions, and these are some of the most important:

A patient, systematic observation will reveal changes in a bird’s plumage. These changes might be due to a genetic, pathological, or stress disorder.

Thus, changes in the color, firmness, and brightness of the feathers are signs that show that something is wrong with the animal. This also applies to their eyes and beak.

There are several other aspects you can detect in a bird by observing changes in its plumage. These are some of the best-known:

Normally a bird sheds its plumage about two or three times a year. But, molting periods are unpredictable when the temperature is higher than usual. Move the bird to a cooler place if you notice this.

This is a form of self-harm the bird inflicts upon itself, and it’s due either to parasites or stress. As you can imagine, it’s very unpleasant for them. So, consult your veterinarian about doing an external deworming procedure.

This is a congenital disorder in which the growth of the feathers stops abruptly.

There’s no cure for this condition but surgery is an optional treatment. A follicular cyst originates when the feathers grow into the skin instead of growing out of it.

You can recognize this disease by the emergence of small red dots on the wings. It’s common in parakeets and usually leads to a lack of hunger and depression. It’s usually fatal in young birds.

This is an aggressive disease that disintegrates a bird’s skin. This highly dangerous condition is due to bacteria. An infected bird will die from it if not detected in time.

In conclusion, feathers can definitely reveal diseases, you just to be aware and on the lookout.

You must keep in mind that birds are highly sensitive animals who often get stressed and this can lead to health problems.

A poor diet can also lead to disorders that affect feather growth in a bird.

Also, you must constantly monitor your bird’s appearance, for the reasons we’ve mentioned in this article. However, keep in mind that you must seek professional help if any of the aforementioned problems occur. A veterinarian can detect diseases and anomalies more accurately and prescribe the most appropriate treatment.

The Most Common Diseases in Pet Birds
Pet birds are intelligent, sociable animals, and they're also vulnerable to common diseases. So, knowing how to recognize the first signs is important. Read more »
Link copied!
Interesting Articles
Birds and Lovebirds
Causes and Treatment of Feather Pecking in Birds