Congenital Diseases in Cats: What You Should Know

There are some diseases that can be passed from parents to children through DNA. If they are detected in time, there are treatment options and cures. However, it's important to know about them early. 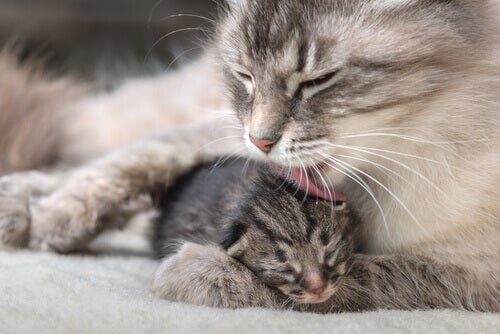 Cats can suffer from some diseases they inherit from their parents. We can’t forget how important genes are in terms of transmitting information. So in this article, we’ll tell you all about congenital diseases in cats.

What congenital disease in cats are there?

According to International Cat Care, previously known as the Feline Advisory Bureau or FAB, there are various different congenital diseases in cats. However, you can treat some of these diseases if you catch them early enough. In fact, some can even be cured.

This organization is a project that collects data on typical diseases of each cat breed. They also look at the incidence of their genes in each specimen. There is an extensive list. However, we’re going to look at the following diseases:

Vets also refer to this disease as polycystic kidney disease. It affects several cat breeds, such as Burmese, Persian, Himalayan, British Shorthair, Scottish fold, and Persian breeds. This disease causes the cats to develop cysts in the kidneys which can increase in size with age. Ultimately, the cysts can cause irreversible kidney failure.

Not all specimens of these breeds suffer from this disease. However, it’s necessary to perform periodic testing to see if your cat has any cysts. That way, you can treat them in time.

This congenital disease is more common in marine coon cats and ragdoll cats. These are breeds that can be born with mutated genes. This issue leads to a thickening of the ventricular walls of the heart. Then, this causes problems with the cat’s heartbeat and the heart’s ability to pump blood.

This disease so far only affects cats of the Norwegian forest breed. It’s related to glycogen metabolism. Unfortunately, pregnant cats that are born with type IV glycogenosis are likely to abort naturally.

Kittens with this disease also die shortly after birth typically. Their bodies don’t have enough energy to survive. However, a small percentage of these kittens can live up to five months. However, then they usually have symptoms of neuromuscular degeneration and usually die from heart attacks.

This is another of the many congenital diseases in cats that only affect particular breeds. In this case, this disease affects the Maine coon cat. Breeders, veterinarians, and scientists only discovered this disease about a decade ago.

Spinal muscular atrophy affects the most basic movements, such as walking, swallowing, or moving their heads. However, for kittens to suffer from this disease, both parents must be carriers of an abnormal gene. Even then, the probability of suffering from it is 25%.

This disease can affect three breeds: Siamese, Burmese, and Korat. It causes abnormalities in the binding process of fats and sugars in brain cells. As a result, the animals end up with neurological problems. These become worse and worse and can ultimately be fatal. Unfortunately, this is difficult to detect until the disease is already very advanced.

This is one of the congenital diseases in cats that affects most breeds. For example, it affects Abyssinian, Ocicat, Somali, Balienes, American Curl, Cornish Rex, Oriental Shorthair, Munchkin, Siamese, and Peterbald.

Progressive retinal atrophy is a degenerative disease that affects cells in the eye. It results in irreversible blindness. At first, it manifests as the loss of night vision and then the loss of daytime vision.

This is another disease that appears in many breeds, including the Abyssinian, Shorthair, Egyptian Mau, Maine coon, Norwegian Forest, Somali, and Savannah.

This is an abnormality that quickly destroys red blood cells, and then the bone marrow can’t replace the number of lost cells. In turn, this causes chronic anemia. Treatment includes frequent blood transfusions. However, in more severe cases, a bone marrow transplant is required.

Seven Common Diseases in Cats
If you're a cat owner, it's good to know what the most common illnesses in cats are, about their symptoms, and how they're treated. Read more »
Link copied!
Interesting Articles
Cats
Cornish Rex, the Cat with Wavy Fur

Would you choose a cat with short, wavy hair and a body like a greyhound’s as a pet? You’d at…