The Story Behind the Japanese Good Fortune Cats

Have you ever noticed a small statue of a cat in the front entrance of a home or business? Today we'll tell you the story behind the Manaki-Neko, the beckoning cat. 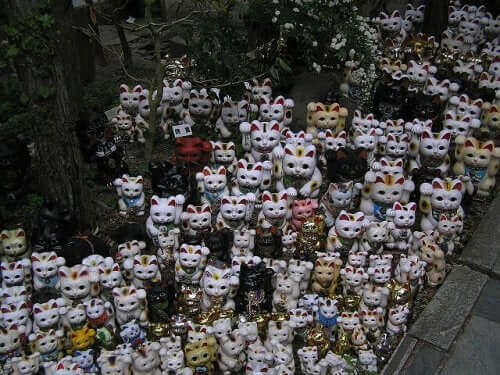 Without a doubt, you’ve noticed the figurine of a white or golden cat at the entrance of some store or business raising their paws to you. They are the Japanese good fortune cats and go by the name of Maneki-neko, which literally means “the beckoning cat”.

Good fortune cats: Why are they so popular?

These cats may be made of plastic or ceramic. However, no matter what material they’re made of, their purpose is the same: to attract good fortune. Most people erroneously believe that these little felines are greeting them as they wave with their front paws. However, as the English translation of Maneki-neko would indicate, this gesture is actually a sign of beckoning.

Don’t forget that Asians bow at the waist or with their heads in order to greet others. The custom of using one’s hand to say hello or goodbye is purely western.

As we mentioned above, the translation of Maneki to English is “to beckon” or to “invite in”. The second part of the figurine’s name–Neko–means cat. Therefore, Maneki-neko means “the cat that invites you in”. What’s more, this movement of the hand is a prominent way to invite someone in or to receive guests in the oriental world.

These statues have long been popular in Asian businesses. However, globalization has now led to their growing popularity in Europe and the Americas as well.

The cat that served as the inspiration behind these lucky charms was the Japanese Bobtail. This breed is famous for not having a tail as the result of a natural mutation affecting the spine.

You can spot these good fortune cats in all types of businesses: Grocery stores, laundromats, gift shops, restaurants, etc. Their front left paw is in the air and sometimes moves up and down, depending on the material the figure is made of. In the right paw, you’ll notice that the cat is holding an antique coin called a Koban. What’s more, some of these cats are wearing a necklace with a bell, which is supposed to drive away evil spirits.

What do the colors of the Maneki-Neko mean?

Cats are very beloved animals in Japan, however, there’s much more to the meaning behind the Maneki-Neko. In Japan, symbolism is very meaningful. This explains why there can be different versions of the Maneki-Neko. Each version means something different.

For example, if the cat greets with its right paw, this is symbols of money and prosperity. However, if it greets with the left paw, then it attracts visitors. There are even cats that have both paws in the air, which is a symbol of protection.

These lucky felines also come in a variety of colors. The version with the most “powers” has three different colors – black, white, and orange. According to the Japanese, this is the best for travelers. It’s worth pointing out that the characteristic of having three different tones of fur is known as Calico. And it just so happens that this is the most common coloration of the Bobtail.

What’s more, you can find Maneki-Neko in a number of different colors, all with their unique meanings:

Legends and the story behind the good fortune cats

But where did the tradition of putting a sculpture of a cat that’s moving its paw in the entrance of businesses and homes? The Japanese don’t have just one explanation. In fact, they have three different legends.

The first legend tells about a temple that was experiencing a number of economic problems. There, a monk shared the little food he had with a cat named Tama. One day, a feudal lord sought shelter from the rain under a tree and saw a tri-colored cat that invited him to enter the temple. Once the man approached the animal, a bolt of lightning struck the tree he’d been standing under.

To pay back the favor, the lord covered the cost of the repairs that the temple needed. In doing so, he brought it back to prosperity.

The second legend tells about a prostitute from Tokyo who had a cat. The owner of the brothel murdered the cat because he believed it was under a spell. Then, the prostitute fell into a deep depression as a result of the cat’s death. Then, one of her clients made a statue of the cat out of wood so she would feel like her cat was always with her.

The third Japanese legend regarding the Maneki-Neko talks about an old woman who had to sell her cat because she was extremely poor. The feline then appeared to her in a dream asking her to make a sculpture of its body with clay. The old woman did as the cat asked, and then quickly sold the statue. From then on, she devoted herself to creating more statues of the good fortune cats and gained more and more clients.

Cat Islands In Japan
Tashirojima and Aoshima are some of the well-known cat islands in Japan. There is 6 cats per inhabitant due to all the tourist feeding the cats. Read more »
Link copied!
Interesting Articles
Cats
5 Curious Facts about the Intelligence of Cats

Cats
Microchips for Cats: Are They Mandatory?

Microchips for cats aren't mandatory; however, experts highly recommend this procedure. This is because it's the most effective way to…