What Makes Cats So Flexible and Agile?

A huge variety of sensory receptors are involved in giving cats their characteristically flexible and agile physique. 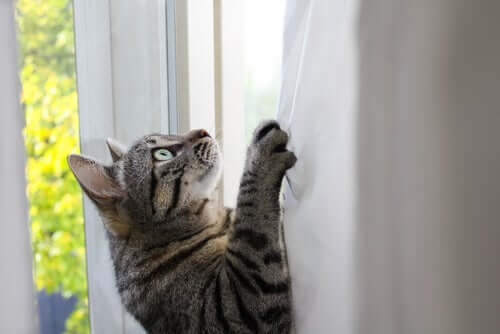 Felines are famous for their ability to climb and explore hard-to-reach places. In fact, domestic cats are so flexible and agile that it seems they have almost no physical limitations. As cat owners will know, there are few places they can’t get to once they set their minds to it.

Cats are naturally curious animals, and like to inspect every inch of their surroundings. It’s their athletic physique and keen senses which allow them to satisfy this instinctive need to explore.

What makes cats so flexible and agile?

A cat’s spinal column is made up of over 50 vertebrae (the exact number varies depending on the length of their tail). This surprisingly large number of bones helps gives cats greater mobility, and allows them to better coordinate the different parts of their body.

The structure of their paws is also a vital factor when it comes to the way cats move. Their paws contain powerful shock absorbers, which are able to reduce the impact when they land on a hard surface. They are also able to extend their large claws when climbing, hunting, or escaping danger.

Furthermore, it’s important to mention the stealth and speed with which these little animals move. Cats are digitigrades, which means they walk on their toes.

They also have a floating collar bone, meaning that their front legs are only joined to the shoulders by muscle. This unusual structural feature, together with the unique placement of their shoulder blades, gives cats greater flexibility, and allows them to move easily in even the narrowest of spaces.

But it’s not just their anatomy which makes cats so flexible and agile. It’s their ability to combine these physical attributes with their finely honed feline senses which makes these animals such remarkable athletes.

One of the most obvious examples is their paws. As well as their unique anatomical structure, a cat’s paws are also involved in regulating body temperature, and detecting vibrations through the ground. This second ability allows them to always be on the look-out for danger.

As well as helping them to regulate body temperature, a cat’s coat is also an important sensory receptor, detecting both pain and movement. At the same time, this dual functionality works alongside the cat’s powerful whiskers, which play an important role in spatial awareness and orientation.

Furthermore, cats have a highly developed night vision, which is crucial when navigating obstacles and moving around at night. The ears, upper lips and nose contain special sensors which are involved with movement, detecting prey, and fleeing potential threats.

Finally, a cat’s inner ear is essential for spacial awareness. Among other functions, this structure plays a vital role in the so-called “righting reflex” which corrects the animal’s orientation and position in the case of a fall from a great height.

The domestic cat’s great agility and flexibility can sometimes be a downside when it comes to family life. Owners must be aware of their pets’ athletic prowess, so that they can cat-proof areas they’d prefer to remain off-limits.