Does your dog lick itself incessantly? Don't stress–it could be a disease with a very simple solution 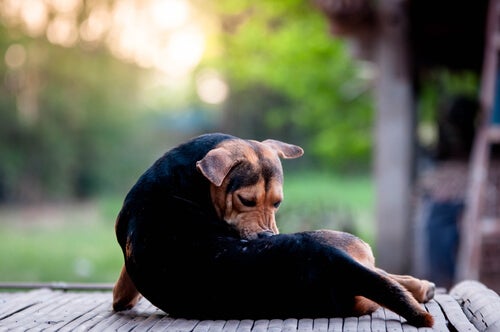 Some animals lick areas of their bodies compulsively. This is the main symptom of canine acral lick dermatitis. The affected area is usually on the legs, and they lick until they create wounds.

Constant licking causes the animal’s skin to swell. The affected area can harden over time. The pelt follicles and the apocrine glands (responsible for the sweating) are cracked. Bacterial infections may also occur.

Treating this this condition is usually quite long and uncomfortable for both the pet and its owners. However, once the diagnosis has been confirmed, a dog must undergo treatment without stopping until healed.

Symptoms and factors that contribute to this disease

The main symptom of canine acral dermatitis is that the animal licks compulsive and tirelessly. In some cases,  medium and high intensity bites accompany the licking.

Wounds can appear within a short period of time (in just hours). It is also possible for several weeks to pass from the moment the animal acquires the habit until the first lesions become evident.

The origins of this illness are varied:

So far it has not been possible to establish a meaningful relationship between genetic factors and the appearance of canine acral lick dermatitis. However,  statistically speaking, some breeds have been more prone to suffer from this illness.

Most of the affected dogs are large breeds:

The vast majority of owners with affected pets bring them to the vet only when the disease is in its advanced stages. This makes the specialist’s work very difficult. Not only will the diagnosis be difficult, the treatment will be as well.

When the doctor first evaluates a dog with obvious wounds, he or she cannot determine which symptoms appeared first. She needs to know if the licking was caused by the wounds, or vice versa.

To avoid unnecessary complications, owners who catch their dogs licking compulsively should go directly to a vet. The same applies to those who notice that their pets’ feet are always moist.

Since cases of acral dermatitis in dogs are caused by various factors, treatments can be varied. Before he can prescribe treatment, the specialist needs to know exactly what caused the adverse symptoms.

The first thing you should do is control the symptoms: prevent the dog from licking himself. That way, his wounds can heal. You may use an Elizabethan collar (pet cone) to prevent him from reaching the affected areas. You can also apply bandages to protect the wounds.

However, the only way to correct this behavior is to completely eliminate the root cause, whether it be physical, environmental or psychological.
Once a diagnosis of acral dermatitis has been confirmed, other specialists are required. Ideally, at least one veterinary dermatologist and a canine ethologist should monitor the patient’s progress.

How to avoid canine acral dermatitis

All dogs and their owners should follow the strictest rules of hygiene and cleanliness. It is essential to reduce the incidence of bacteria, fungi, mites or parasites. It is also important to avoid stress and sudden changes in your pet’s routine.

Breeds like the Golden Retriever or the boxer need a lot of physical exercise to use all the energy bottled up inside of them. If they can’t do that, they will not only get bored, they will also become extremely anxious.

Other breeds, like the German Shepherd, don’t only need to go on walks, run and jump. They also need mental games to relax and escape from monotony.

Taking your dog to a Pet Expo may sound great, but it requires a lot of dedication. Most of these…

Dogs
Panda Dogs: Everything You've Ever Wanted to Know

Panda dogs, a new breed or an art trend? Let's take a closer look at this new craze from China.…

Having a dog at home is something the whole family loves. The problem is that they can't accompany us to…