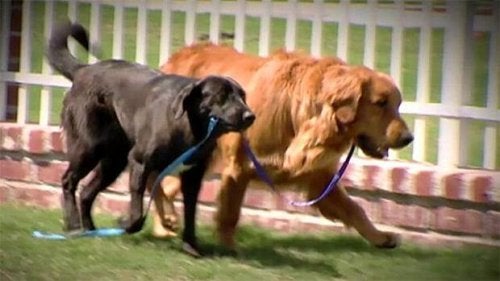 Guide dogs are wonderful animals, able to give their owners a whole new life with their empathy and tireless dedication. Some get recognition on social media and others get famous for some special heroic act. But there are many other cases that go unnoticed yet are valuable lessons. Enjoy today’s sweet story: a blind dog being saved by his guide dog.

A blind dog saved by his buddy

The sweet story of friendship between Tanner and Blair is a great example of canine friendship. Tanner is a golden retriever, with epilepsy and born blind. There was hardly any hope for him when he entered the Woodland West Animal Hospital in Oklahoma.

Tanner, the rescued blind dog, was only two years old, but had already gone through two families that ended up giving up on him. The visible trauma he carried and his practically nightly seizures made doctors seriously consider the possibility of putting him down. It made no sense to prolong his pain.

But an unexpected event and visit gave a twist to the story. Blair, a Labrador retriever, came to the clinic at the same time. He came from wandering around and surviving on the streets, with gunshot wounds as evidence of how bad his life had been. His timid expression and skittish behavior showed how fearful he was.

At first nobody imagined that Tanner and Blair, both suffering from their bad fortune, would be instant friends. But they did. The two dogs began to spend time together and hospital staff soon saw huge improvements. It looked like the rescued blind dog would have a chance at a normal life.

It happened naturally. No one trained Blair to pick up Tanner’s leash and start guiding him. In return, contact with Tanner significantly lowered Blair’s anxiety levels.

The clinic’s employees said that Tanner stopped having seizures and Blair was getting less scared. This beautiful story of friendship soon was discovered by the media and the offers of foster homes multiplied.

The clinic veterinarians decided that wherever they went, Tanner and Blair had to go together. A few months later, the pair were taken in by a family in Jenks, a small town located in Tulsa County. Not only do they continue to live together, but they have found a third amigo named Louie, a dog who was already living with his new family.

There are many beautiful stories in the news about dogs that save their people’s lives. In 2001, a blind Colombian engineer named Omar Eduardo Rivera worked on the 71st floor of one of the twin towers in New York. His guide dog Salty save his life. Salty helped him down the stairs and out of the building, as the survivor recounted.

Rivera had gotten to work early that day to deliver documents for an important meeting. He was an employee of the Port Authority’s technology department.

Accompanied by his guide dog, he was surprised when someone shouted, “What the hell is this plane doing here?” A little later came the impact and an incredibly loud noise. The building began to shake, and that’s what he remembers. That’s when his guide dog, a Labrador, got up from next to his desk and Rivera heard pieces of glass falling.

In the midst of confusion… a canine friend

Rivera said there was a lot of confusion, smoke, and the smell of gasoline. Everyone was panicking. Some people rushed to be the first to evacuate. In those moments when confusion reigned, Rivera prayed that he would get out alive.

Salty took care of guiding his owner and friend safely to the street. The engineer went down along with his boss, Danna Enrigt, who on floor 64 or 65 tried to remove Salty’s leash to expedite the process. But the dog refused to continue without it and had to be calmed down.

Taking your dog to a Pet Expo may sound great, but it requires a lot of dedication. Most of these…

Dogs
Panda Dogs: Everything You've Ever Wanted to Know

Panda dogs, a new breed or an art trend? Let's take a closer look at this new craze from China.…

Having a dog at home is something the whole family loves. The problem is that they can't accompany us to…