Canine Warts: Why Do Dogs Get Warts?

Similar to people, warts often appear on dogs' skin or mucosa. Next, we'll explain the reasons for their appearance. 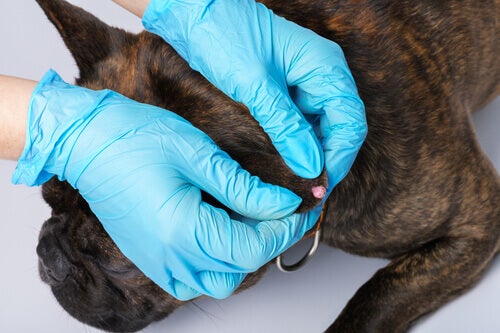 Among lots of possible cutaneous diseases that dogs can get, warts are very common. Fortunately, although they’re very common, in most cases they don’t pose a serious problem for the dog. Almost always, canine warts are just an overgrowth of tissue that can even go away on their own.

What is a wart?

You might already have an image of a wart in your head: a small wrinkled, skin-colored lump, either isolated or accompanied by other warts.

However, this isn’t a valid medical definition. Medically, a wart is the abnormal overgrowth of epithelial tissue caused by the papillomavirus.

Strictly speaking, you could define a wart as a cutaneous tumor. A tumor is simply an abnormal growth of tissue without necessarily being malignant.

This type of injury can appear in dogs of any breed or condition. However, it usually occurs more frequently in young or elderly animals or in dogs with a disease that affect their immune systems.

Why do canine warts appear?

Canine warts appear simply because of exposure to the virus. If an animal is infected and has warts, they can transmit the virus directly by contact with another dog or through touching surfaces, such as toys or beds. In addition, there are animals who have infectious viral particles on their skin without developing any warts.

When viral particles leave the original wart, they can move to other epithelial tissue and the virus can replicate. On the new tissue, the virus causes a new wart to appear. This wart also has infectious viral particles, meaning the cycle begins all over again.

For example, each wart can cause infections on another dog, but also on the same dog in a different location. This means that usually warts aren’t isolated. Once your dog has one, more tend to appear on various parts of the animal’s body.

Fortunately, the virus that causes warts in dogs doesn’t affect people. Humans are susceptible to a different type of the papillomavirus.

If I notice canine warts on my dog, should I be concerned?

Generally, no. As we already mentioned, this is a benign condition. From a medical point of view, these are usually asymptomatic lesions that, at most, cause a slight discomfort to the animal.

However, these can be painful if the wart is located in a delicate area, such as the palpebral edge of the eye or the mouth.

To avoid any possible complications, we always recommend that you go to the vet if you notice your dog is developing any skin lesions. Although warts are usually benign, your vet can evaluate the wart to confirm that it’s benign and make sure it’s not another issue, such as mastocytomas.

As a dog’s immune system will kick in at the sign of any injury, canine warts are usually self-limiting. As the animal’s defenses fight the virus, the wart will disappear.

However, sometimes these lesions never reach total remission. In these cases, your vet might recommend surgical resection.

Typically, your vet will only recommend this surgery if the wart is a delicate area, such as the eyes or mouth, or compromises the dog’s quality of life in some way.

In conclusion, warts are lesions that result from highly contagious viral infections. Although they don’t usually cause serious problems and aren’t typically malignant, we recommend that you take your dog to the vet to avoid any possible complications.

Dog Care: Treating Warts Around the Eyes
Warts around the eyes are usually caused by a type of virus, and generally appear when the animal's immune defenses are low. Read more »
Link copied!
Interesting Articles
Dogs
7 Causes of Suffocation in Dogs