Why Do Dogs Smell Your Crotch?

All of your uncomfortable pet questions, answered. 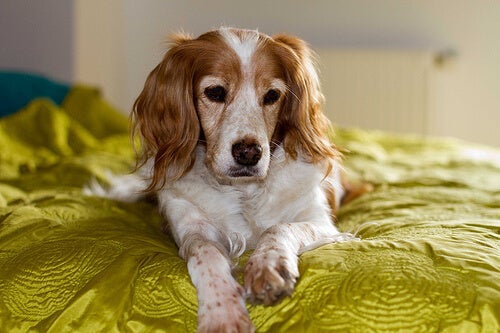 It’s normal to feel embarrassed when dogs smell your crotch or butt. But before you stop or punish your pet, it’s important to understand his behavior better. What seems annoying to us is natural behavior for them.

The first thing to understand is that the animal doesn’t have bad intentions; he’s not trying to annoy or intimidate you. Actually, pets have no idea that smelling a crotch is considered rude by humans.
The problem is that we humanize domestic animals so much, that we are sometimes frightened by behavior that is normal for their species. To expect a dog to abide by the same social rules as humans is to disrespect his nature. This can cause him pain and can facilitate the manifestation of various diseases in his body.

Why do dogs smell the genitals of other dogs?

Human communication is rich and diverse. But it’s far from being the only means of communication. Dogs express themselves, communicate and have their own body language too.

Some aspects of our pet’s codes of conduct may be strange to us. But doesn’t the same thing happen to them? It’s easy to see that our dogs look at us in a strange way when we exhibit certain attitudes day by day.

In the end, we do not have to use the same body language as our best canine friends. But we should respect it.

A dog’s sense of smell is his main sense for exploration and recognition. This is how they capture stimuli and information about the environment, in order to get to know their surroundings. They get to know animals and people around them by sniffing as well.

But, why do they head straight for the crotch?

Mammals have sweat apocrine glands located in different parts of their bodies. These small structures are responsible for producing odorous body fluids called pheromones. These fluids convey information about each individual, fulfilling an important social function in the Ecosystem.

In dogs, these odorous fluids are concentrated in the genital area. That’s why dogs usually “greet” each other on the street by sniffing their most intimate parts.

What does it mean when a dog smells your crotch?

Human beings have different types of sweat glands scattered all throughout the skin. This is a mechanism for temperature control and fluid exchange with the environment.

However, the sweat apocrine glands are concentrated in our armpits and groin. That’s why the dog usually smells our intimate parts immediately.

Dogs smell our crotches or our butts as a way to establish a connection. It’s as if he wants to introduce himself and get to know a new person at the same time. That is why it is more likely to  happen when you encounter unknown animals.

Why do dogs sometimes smell one person more intensely than others?

Many times, dogs can show more curiosity about a certain person’s smell. Or they might sniff someone’s genitals more intensely.
Certain conditions of the human body can actually increase the production and release of pheromones.
Humans release a large amount of pheromones during sex. For this reason, dogs can be very curious to sniff people who have had sex recently.
As for women, it is common for dogs to show particular interest in smelling their genitals during the menstrual period and ovulation. They also show curiosity about women who are breastfeeding or have recently given birth.

What should you do when a dog smells your crotch?

This behavior is part of a dog’s way of life. Stifling his instincts is really painful for the animal. There is no need for it, especially because this behavior does not present a real risk for humans or other animals.

The socialization process helps to reduce an animal’s reaction to various stimuli, mainly noises. But it can be ineffective in relation sniffing recognition instincts.
It might seem strange, but it’s best not to do anything at all. The animal will stop this behavior once he knows the person. He won’t do any harm or offend anyone.
What you can do is to avoid letting your dog have contact with people who do not feel comfortable with dogs.
In conclusion, when dogs smell your crotch, they are exercising their instincts and making a new friend.
Main image source: alexplayground
Link copied!
Interesting Articles
Dogs
Which Dog Breeds Are Most Likely to Run Away?