How Safe Are Antihistamines for Dogs?

Antihistamines are safe for dogs as long as they're prescribed by a veterinarian after evaluating and diagnosing the animal. 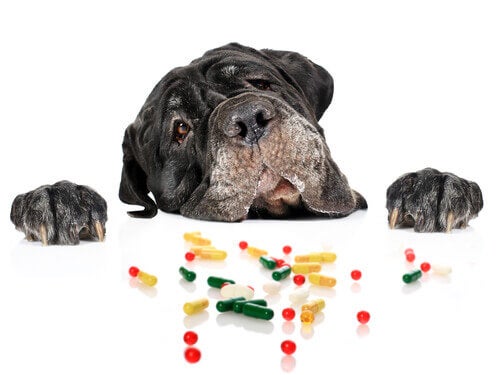 Antihistamines are medications used for the ongoing treatment of allergies and have a place in veterinary medicine even though they aren’t frequently prescribed for dogs.

Due to their widespread use in humans, it’s common to wonder if these types of drugs are safe for dogs. As always, the vet should be the one who prescribes this kind of treatment. In any case, continue reading to find out more about antihistamines, as it may answer some of your questions.

As its name indicates, an antihistamine has a direct impact on histamine — a molecule with a local reaction that impacts the immune system of mammals in allergic processes. It also has other functions in the bloodstream and nervous system.

Histamine is involved in hypersensitivity reactions to an allergen (grass pollen, dust, some types of food, etc).

Mechanism of action of antihistamines in dogs

Firstly, there are three types of anti-histamine drugs, and each of them works differently:

Are antihistamines safe for dogs?

This medication is safe as long as it’s properly prescribed by a veterinarian and the owner complies with their instructions. Stopping the symptoms caused by a high release of histamine (typical of allergic reactions) and protecting the gastrointestinal mucosa are its main effects.

H1 antihistamines act on H1 histamine receptors, responsible for vasodilation, vascular permeability, and contraction of the bronchial and intestinal muscle. This type of drug is used in allergic reactions and anaphylactic shock. Also when there is itching, hives, dermatitis, eczema, and insect bites, among others, in combination with other drugs.

In addition, H2 histamine receptors regulate the secretion of HCl in the stomach and have a heart stimulating effect. Thus, doctors use antihistamine antagonists of this receptor to palliate the effects on the digestive system — specifically gastroduodenal ulcers and gastritis.

Gastric ulcers appear due to an imbalance in the secretion of stomach acid and an alteration of the mucosa. This imbalance may be due to stress and the continued use of drugs such as non-steroidal anti-inflammatory drugs.

Finally, doctors prescribe antihistamine H2 receptor antagonists because they have an antisecretory effect until the gastric protection barrier restores.

Side effects of antihistamines in dogs

Antihistamines are usually prescribed along with other medications to treat allergy symptoms. However, it doesn’t stop itching immediately, which is the most annoying symptom. You can enhance its effect by adding omega-3 or omega-6 acids to your dog’s regular diet.

These medications can have certain side effects, which a vet must inform you about prior to their use. Drowsiness is the main side effect of antihistamines, but there may be other effects such as:

It’s important not to give antihistamines to your dog unless a veterinarian recommends their use and prescribes them. Don’t medicate your dog on your own; you must always use drugs with caution, but particularly in animals. Especially in those that are pregnant or have a liver condition, convulsions, urinary retention, glaucoma, and gastrointestinal atony.

There are alternatives to the use of antihistamines, either as an oral medication or as a topical treatment. Again, always consult your veterinarian before using these drugs to treat your animal pal.

Skin Irritation in Dogs: How to Treat It at Home
Dermatitis is one of the most frequent canine skin conditions. Read today's article to find out more about skin irritation in dogs. Read more »
Link copied!
Interesting Articles
Dogs
Meet the Wetterhoun: The Frisian Water Dog