Ferret Behaviors: What You Need to Know 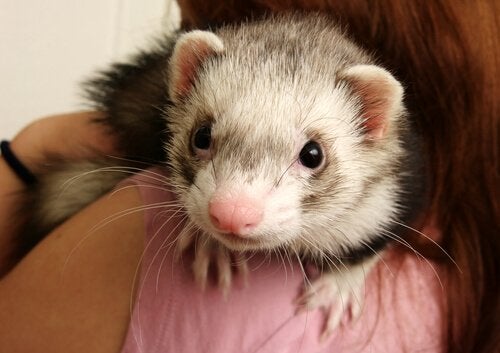 Ferrets have been recently introduced to people’s homes as pets. They stand out because they’re small, social, and fun mammals. If you’re thinking about adding one to your family, then you can read this article to learn everything you need to know about ferret behavior.

Even though right now ferrets are pets, in a lot of places they are used for hunting. Their specialty is rabbits because their body allows them to easily enter their dens.

Therefore, you should keep in mind that even though they’re social and loving animals, a few generations ago they were hunting animals. Ferrets have a lot of instincts that are related to their past job or life in the wild. This is true even though they live in people’s homes.

A lot of the behavioral traits of ferrets are intimately related to their past life. If you let them fulfill their instinctual needs, even as a household pet, they’ll be much happier and will have fewer behavioral issues.

Despite their size, ferrets are very active and energetic animals. Therefore, the first step to making your ferret happier is to let them exercise. This means both in their cage and around the house. The perfect cage for ferrets is one with several levels and a lot of space so they can move.

That being said, ferrets get rid of a lot of energy by playing. If they have other ferret friends at home, they will play among themselves. If not, they will look for humans to take part in their games.

Either way, they need games to keep themselves entertained. Balls, strings hanging from their cage, baby toys, and long tunnels they can run through are some of the toys they usually to enjoy the most.

In contrast to their boundless energy, ferrets need to sleep for several hours. Some sleep so deeply they appear to be dead. You should provide them with sheltered cozy areas in their cage so that they can rest peacefully and wake up completely recharged.

Another one of the behavioral traits of ferrets their tremendous curiosity. Ferrets tend to scan their surroundings and explore everything. They will try to put their head in all the bags you bring home. They’ll also explore every corner of your house. Be sure that your house is safe so they don’t hurt themselves during their adventures.

Even though people react badly toward the ferret behaviors, making mischief is part of their nature. Ferrets need to eat several times per day with several small portions. Therefore, when their plate is full, the first thing they do is hide part of the food around the house. This behavior lets them feel sure they’ll have food for the rest of the day.

However, they don’t just steal food. They’re attracted to shiny, metallic objects and rubber. If you’re missing things at home like pens, erasers, or keys, it’s likely that your ferret has hidden them in one of their secret hiding places. They don’t do it to be mean. It’s another one of their instincts.

Ferrets can get a bit rough playing among themselves. They tend to bite when they play. However, they don’t hurt each other. When they bite your hands and feet, it can be annoying., but this doesn’t mean that ferrets are aggressive or that they are trying to hurt you. They’re just playing.

Like with any animal, you can teach ferrets to behave better. You need to do this while keeping their boundaries and instincts in mind. It’s very likely that you’ll never get them to stop stealing your keys and money.

Ferrets are easily startled. When this happens, they are impossible to catch. That’s why using punishment as a training method is useless. On the other hand, training them to behave well or perform tricks through positive reinforcement will give you quick positive results.

Reward your ferret when they do something good. When they play without hurting you, when they’re curious without breaking things, or when they decide not to steal your keys. This reward can be a box or simply praising them.

Ignore their bad behavior. Interrupt their play if they’re hurting you or take away their toys if they’re destroying them or using them badly. Ferrets are smart, intelligent animals that will quickly find out you’ll give them a treat if they behave.

Ferrets are fun and energetic animals. If you want to add a ferret into your family, keep in mind that you’ll have to play with them a lot so that they will be happy. Also, they will become more active and a little bit noisier during the evening. The rest of the time, you can enjoy having a fun and loving mammal.

Ferrets
Considerations Before Having a Ferret as a Pet

Before having a ferret as a pet, there are many aspects you need to take into consideration. These include the…

Ferrets
The Most Common Ferret Diseases

One pet that's gaining popularity throughout the world is the ferret. This friendly mammal needs certain special care regarding their…

Ferrets are small carnivorous animals, usually weighing between 2.5 and 5 pounds. They make great pets and are typically very active and highly curious. They sleep for many hours a…

Domestic ferrets have become popular pets in recent years. Nowadays, you might even see owners taking their ferrets out for…