Do you know what velvet disease in fish is and how it's cured? If you have fish, you'll definitely want to know everything about it: symptoms, treatment, prevention and much more. 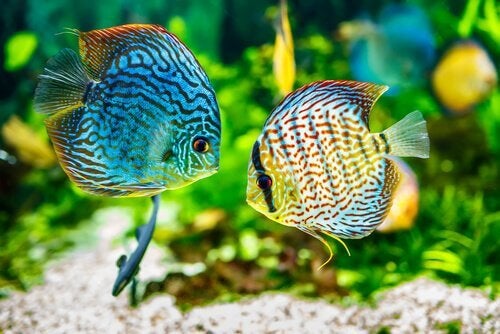 It’s important to know what the causes and symptoms of velvet disease in fish are. This information is especially useful for anyone who has these animals as pets and still who still isn’t entirely sure how to take care of them correctly.

In this article, we’ll show you what the aspects of this disease are and how it affects both freshwater and saltwater fish.

What is velvet disease in fish?

One of the main characteristics of this disease is that fish’s skin starts to have small spots or hairy specks. These can be all different colors: yellowish, whiteish or gray, among others. To the naked eye, this layer looks like velvet—hence the name of this disease.

One of the first symptoms you’ll notice is a change in your fish’s behavior. In fact, before you’ll even see the velvety specks on his skin, you’ll realize that his behavior is changing.

In the initial phase of the disease, the fish will rub its body up against rocks and plants. Also, they may start to appear more apathetic and start moving around less. So, fish owners should be attentive to their pet’s behaviour in order to be aware of any obvious changes.

Specks on the skin

As the disease progresses, the spots on their skin will become visible. Sometimes they can be so small they’re almost invisible. The diseases will usually show up on their fins first, then slowly spread to the rest of their body.

In many cases, the affected areas will appear to be more opaque. Also, if you look at the fish sideways on, you may be able to see the velvet layer forming on his body.

When the disease is much more advanced, the animal’s skin may begin to fall off in strips. Also, the fish will have more trouble breathing so they’ll gasp for air more often than usual.

It’s important to know that this disease is highly contagious. So, if you notice any of these symptoms, the affected fish should be isolated. Also, you should take the animal to the vet so he can evaluate the most effective way to eliminate the skin parasite.

To attack this type of parasite, the vet may prescribe a series of medications as treatment. The medications they usually recommend are: metronidazole, copper sulfate, methylene blue, salt or other similar commercial treatments.

When it comes to prevention, hygiene is essential. In fact, in many cases sudden changes in the temperature or pH of the water can cause the appearance of these parasites.

To prevent them, you should constantly change and clean the water. Also, make sure you’re adding the necessary chemicals to the aquarium to keep it in optimum condition.

Another aspect of vital importance to prevent this and other diseases is to put any new fish and plants in quarantine before putting them in the main aquarium. Make sure to always observe the behavior of the fish, including their interactions with one another.

The fish’s diet is another key factor in the prevention of diseases. So, make sure you’re giving them a healthy and varied diet that meets the recommendations of your vet. These will vary, depending on the type of fish.

Velvet disease in fish is very serious. That’s why you should be very attentive to the behavior and physical changes of the fish in the aquarium. It’s important to combat this disease quickly since the other fish in the aquarium could suffer from it, and may even die.

Prevention is one of the most fundamental aspects. You have to be sure to test the pH of the water and to maintain the hygiene of the aquarium. Also, when introducing new fish and plants to the tank, you should quarantine them first to prevent the spread of any diseases.

Deadly Diseases in Cats and Cogs
These pathologies have symptoms that often aren't specific, which is why it's difficult to detect that your pet is suffering from them. In some cases, they are extremely contagious Read more »
Link copied!
Interesting Articles
Fish
Sea Anemone - The Animal Disguised as a Plant

Having an aquarium at home for fish has always been popular. Fish are relatively easy to care for and an aquarium can also form part of the decoration at home.…

Having fish doesn't mean simply buying a bowl, pouring water on it and throwing them in! Keeping fish is a…