Their docile nature and biological similarities to humans mean that mice are commonly used in experiments. 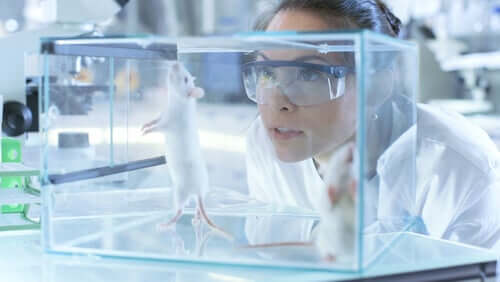 For over a century, humans around the world have used laboratory mice as models for medical testing and experiments. This small rodent is closely related to the house mouse (Mus musculus), an animal that has become accustomed to living in close contact with humans, whose homes provide it with both shelter and food.

Do you want to know why these animals are ideal for use in experiments? In today’s article, we’ll tell you why mice are the animal model of choice. After all, it’s thanks to these animals that scientists have made huge advances in curing serious cardiac diseases, immunodeficiency disorders, and cancer.

What are animal models?

Animal models are widely used in life sciences such as medicine or biology. In fact, humans have used animals in experiments since before the time of the Ancient Greeks, except during the middle ages when laws imposed by the Catholic church forbade the desecration of corpses.

In the past, scientists conducted experiments on both animals and humans. However, the introduction of the Nuremberg Code after the Second World War prohibited the use of human testing in the development of new drugs.

Scientists have sequenced the genomes of all animal models used in experiments, allowing researchers to extrapolate the results of one study and apply them to other animals, including humans. According to the US National Defense Research Committee, an animal model is defined as:

“A living organism in which normative biology or behavior can be studied, or in which a spontaneous or induced pathological process can be investigated, and in which the phenomenon in one or more respects resembles the same phenomenon in humans or other species of animal.”

The use of animal models allows scientists to have a greater understanding of the biology and pathophysiology of diseases which affect both humans and other animals. After all, much of the research done in laboratories can also apply itself to veterinary medicine.

Researchers use a huge variety of different animals in scientific experiments: mice, rats, rabbits, dogs, pigs, sheep, frogs, flies, monkeys etc. But the most used animal model of all is the mouse – in more than 50% of cases.

There are many reasons why mice are the animal model of choice:

Thanks to lab mice, researchers have succeeded in making huge advances in the investigation of autoimmune diseases and cancer. However, it’s important to remember that these animals are sentient beings, with their own needs, and a well-defined and well-known ethology.

Mice are sociable animals that naturally live in large groups. Any decision to isolate individual mice must be fully justified by researchers. Once the mice are 21 days old, scientists separate them according to sex. Otherwise, they would undoubtedly start to reproduce, creating unwanted litters.

Once these male and female groups are in place, researchers cannot remove or introduce new individuals, as it can destabilize the group hierarchy. This can lead to fights and injuries, especially when it comes to males.

Cage dimensions and the number of mice that can be kept in a single cage are stipulated by law.

Environmental enrichment is essential for ensuring an animal’s mental and physical health. If an animal starts to develop abnormal behaviors, it not only raises a number of serious animal welfare issues, but will mean that none of the results from the study will be valid.

Cosmetic Experiments and Cosmetics on Dogs
There's so many products made for the hygiene and care of our dogs. But what are the risks of using these cosmetics on our dogs? Read more »
Link copied!
Interesting Articles
Hamsters and Rodents
Hamster Toys You Can Make at Home

Most rodent pets live in cages. While we sometimes let them out for exercise, most of their time is spent in a fairly small space where they eat, sleep, or do their…

Hamsters and Rodents
5 Species of Hamster

Hamsters are very popular pets, particularly among children. They're friendly, independent, and easy to care for. However, not many people realize that there are several domestic species of hamster and…

Rodents (rats in this case) are the first link to study the effects of new drugs or medical techniques. Their…

Hamsters and Rodents
How to Prepare Your Guinea Pig's Cage

For years, guinea pigs have been one of the most popular domestic pets. However, it seems like they're particularly on-trend…