Mites - parasites on the skin - are responsible for the easy spread of this disease. The signs are easy to recognize. Your guinea pig will scratch compulsively to the point they can injure themselves if not treated. 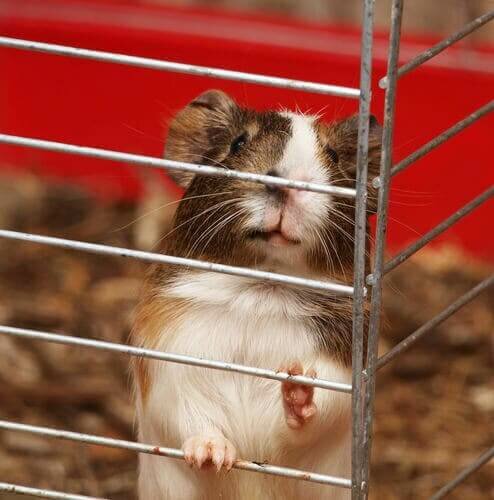 Scabies in guinea pigs is actually more common than you might think. In fact, it affects thousands of animals every year. It’s important to know about this disease so you can take proper precautions. So, do you know what scabies is? We’ll tell you everything you need to know, such as its causes, symptoms, and treatment.

Everything you need to know about scabies in guinea pigs

Scabies is a disease that produces mites. These act as parasites on the animal’s skin. These make the animal want to scratch and they can even injure themselves from intense scratching. First, the mite is introduced through the specimen’s skin. Then, it begins to lay eggs that later become other mites. Finally, this same cycle is repeated over and over again until the animal is fully infected.

These mites reproduce so quickly that guinea pigs can be completely covered in no time at all. In fact, if you have more than one guinea pig, you need to separate them as soon as possible. This disease is contagious via contact with the skin or any other object that the infected guinea pig may have touched.

To kill all mites, we recommend washing everything in your guinea pig’s cage, including the bedding, the trough, and the feeder. You should also wash any toys. It’s best to sterilize these with hot water or, if finances allow, throw them away and buy new ones.

Causes of scabies in guinea pigs

It’s uncommon that scabies in guinea pigs just appear. Usually, this disease is caught when your animal has been in contact with an infected animal. However, this doesn’t have to be a guinea pig. It could be a dog, cat, hamster, or other animal.

Alternatively, your guinea pig can also become infected by living in unsanitary, unhygienic conditions. So, this is unlikely if you have a guinea pig as a pet, as long as you care for it properly.

Symptoms of scabies in guinea pigs

At first, the symptoms might not be very evident. The most common symptom is very itchy skin. Your guinea pig will start scratching. However, in the early stages, your pet may not be scratching because there’ll just be eggs on one area of the body.

However, as these mites hatch and reproduce, the itching will start and quickly spread to all areas of the body. You’ll start to notice your guinea pig scratching compulsively. Over time, your pet’s hair will begin to fall out. Your guinea pig could also start to lose weight since the discomfort of the disease will take away their appetite.

You may also notice dandruff caused by the scratching. This scratching can also be worse at night. Finally, you may also see small wounds on your guinea pig from biting or scratching their skin.

Treatment of scabies in guinea pigs is similar to how you manage the disease in other animals and humans. The main goal is to kill the parasite. One way to do this is through injections of a drug called ivermectin.

A vet can give this medicine orally or topically. However, the decision of how to deliver the medication will depend on how advanced the disease is.

Selamectin is another option in terms of medication. Talk to your vet for advice on what medication to use and how to apply the treatment. The length of treatment depends on the seriousness of the disease. However, the treatment usually lasts at least 15 days.

Be sure to give the doses accurately. Exceeding the dosage can kill the guinea pig. So make sure you always follow the veterinarian’s instructions and advice to the letter.

Scabies isn’t a deadly disease, but it can cause a lot of suffering for your animal. It can also seriously deteriorate your pet’s health and appearance. Therefore, as soon as you see any change in behavior or any symptoms, go to the vet right away!

Puppies With Scabies: Causes and Symptoms
Scabies is normally contagious and causes strong itching in whoever suffers from it. Want to know about how puppies with scabies can be treated? Read along! Read more »
Link copied!
Interesting Articles
Hamsters and Rodents
Do Hamsters Hibernate?

Hamsters and Rodents
Differences between Gerbils and Guinea Pigs

Gerbils and guinea pigs are great pets who've found a place in the hearts of many generations. However, those who've…