The Differences Between Rabbits and Hares

Although they are very similar, these viviparous mammals have important physical and behavioral differences. Some are good pets and others are chosen for sport hunting. 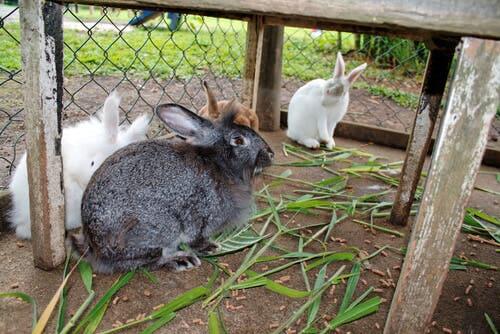 Although they come from the same family, rabbits and hares have clear differences. Depending on the species, these differences may be more noticeable in some cases.

The differences between both animals are established from birth. On the one hand, hares are born more developed and with fur. On the other hand, rabbits develop over time. Additionally, they have reduced motor skills well into growth.

Rabbits and hares also have different habits. By nature, rabbits hide in dangerous situations. Instead, hares tend to flee.

For these reasons, among others, many people chose hares for sport hunting. On the other hand, many rabbits are raised as domestic pets.

Differences between rabbits and hares

You can see clear differences between rabbits and hares in their appearance and their habits. Physically, rabbits have rounder heads and their eyes are on the sides of their heads. Their bodies and legs are also shorter than hares’. Alternatively, hares have larger, leaner bodies and legs.

Hares are larger in appearance than rabbits. However, their ears and limbs are much more slender. This makes hares better runners than rabbits. In fact, hares are known for reaching higher heights while running.

Rabbits’ bodies are chubbier than hares’. Also, their ears are much shorter. Their average weight is 3.3 to 4.4 pounds. They can grow up to 20 inches in larger species of rabbits.

In hares, the size of their ears is noticeable. Their eyes can be more than 4 inches long.

Although the coat varies according to the species of rabbit or hare, there are certain identifiable differences. For example, hares have black spots on their skin. In addition, as we mentioned earlier, young hares are born with fur.

Changes to the coat are also different between species. During the fall and spring, the coats of hares living in cold areas change to white. However, rabbits’ coats change in the winter.

Habits that differentiate rabbits and hares

Unlike rabbits, which live in burrows, hares prefer open spaces. To protect themselves, hares choose bushes or nests built at ground level. These habits make hares more vulnerable to hunting.

Both rabbits and hares are known to be great breeders. However, the two differ in mating rituals and gestation periods.

To choose a mate, female hares make males run a long distance behind them. As a result, they can test their interest and their endurance. However, when a female hare is unwilling to mate, she faces the male upright on her two front legs.

The gestation period of rabbits is 30 days, while hares’ gestation period is 42 days. Young rabbits are born with their eyes closed, without fur, and unable to walk. As a result, rabbit mothers are very overprotective of their young.

Hares are independent and solitary by nature. However, rabbits live in patriarchal colonies. In threatening situations, hares run away while rabbits hide in their burrows.

Another notable difference is that rabbits are more easily domesticated than hares. Rabbit farms are very common. In fact, many people have rabbits as pets in their homes because they’re docile and passive animals. However, hares are not compatible with any type of closed space.

Similarities between rabbits and hares

Tips For Socializing Pet Rabbits
These animals can be much more territorial with one another than you may think. Today we'll tell you all you need to know about socializing pet rabbits. Read more »
Link copied!
Interesting Articles
Rabbits
How To Get Rid of Parasites in Rabbits

Rabbits are herbivorous animals, so feeding them is simple. For one, there's a wide range of food created just for…

More and more families are choosing to adopt a rabbit because they need less work than a dog. For one thing, they don’t need to go out for walks. However, they do need specific care,…