The Continental Giant: The Biggest Rabbit in the World

The Continental Giant is a rabbit breed that can wiegh as much as 22 pounds. These animals are raised for the production of their meat and their fur. At the same time, they are used as pets, in assisted therapy, and education. 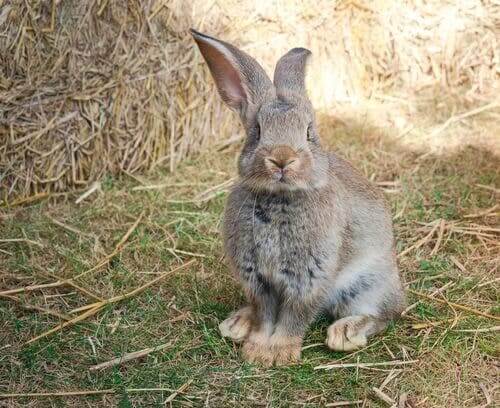 The Continental Giant, also known as the German Giant, is not a species. Rather, it’s a very large domestic rabbit breed (Oryctolagus cuniculus domesticus).

Given the fact that these rabbits are very docile, many choose to keep them as pets. However, it’s clear that, because of their large size, not just anyone can take on giving these animals the care that they require.

But some people will be able to adopt a Continental Giant and offer it a healthy lifestyle according to its needs. And these families affirm that these animals are gentle and make excellent companions.

The original of the Giant Continental rabbit breed

The Continental Giant is one of the largest and oldest rabbit breeds in existence. In fact, there’s evidence that suggests that the breed dates all the way back to the mid 16th century.

Around the middle of the 19th century, England imported these animals, which share their ancestry with the Belgian Hare. However, it wasn’t until much later–around 1910–that people started to pay attention to the Continental Giant. And, at that time, the breed began to appear in small livestock spectacles that took place all over the country.

Today, this is one of the most popular breeds in rabbit fairs given its enormous size and because of its varied and attractive colors.

The size of the Continental Giant

This is one of the largest breeds of domestic rabbits. Most of these “giants” weigh around 13 pounds, but specimens that weigh as much as 22 pounds aren’t unusual. What’s more, the continental giant is long and very powerful, and its hind legs are wide and muscular.

In the following photograph, we can appreciate how large these incredible animals can grow to be. So, the name “Continental Giant” isn’t much of an exaggeration, is it?

Another characteristic of this rabbit breed is the arch of its back, which begins at the shoulders and extends to the base of the tail. This gives the animal a “mandolin” shape.

Males have a larger and wider head than females. At the same time, females have a more pronounced jowl. In addition, they have long and erect ears.

The fur of the Continental Giant is thick and shiny and comes in a wide variety of colors. Black, white, sand, tawny, steel grey, and light grey.

Another characteristic that makes them very desirable as pets are their bright round eyes.

A docile and friendly giant

A lovable nature and noteworthy intelligence make these rabbits a great pet. In fact, many people say that Continental Giants act more like dogs than rabbits.

These animals are easy to train and will play, given the proper encouragement. They can also learn to use a litter box and come when called fairly easily.

In general, Continental Rabbits don’t enjoy being carried, especially not roughly. Furthermore, in order for these rabbits to relax around humans, it’s important to handle them gently from the time they’re small.

It’s important to be aware that any imprudent or irresponsible handling may cause injury to the Continental Giants spinal column, and injury to the handler.

The needs of a Continental Giant

For all of these reasons, as well as its strength and size, the Continental Giant may not be the best pet for inexperienced owners or families with small children. It’s also important to know beforehand that these animals require a great deal of food and produce abundant amounts of waste.

Any person that’s considering adopting a Continental Giant must carefully consider whether or not they’re able to satisfy its needs.

Being so large, this rabbit breed needs considerable space in order to move around naturally without feeling boxed in. Apartments and homes with small yards are not enough to suit these gigantic rabbits.

In addition, potential owners should keep in mind that the amount of food the Continental Giant consumes is much greater than that of a common rabbit. Therefore, it’s important to be well-informed on the subject and understand that this breed needs plenty of food in order to maintain good health.

Of course, these are not the only needs of the Continental Giant. However, they’re important factors to keep in mind if you’re considering the possibility of adoption or of purchasing one as a pet.

Foods that Are Dangerous for Rabbits
An excess of certain leaves, vegetables, and fruits can cause problems for a rabbit's health. Today we'll talk about foods that are dangerous for rabbits. Read more »
Link copied!
Interesting Articles
Rabbits
How Many Types of Domestic Rabbits Are There?