Vaccines are essential to prevent myxomatosis and hemorrhagic disease, both fatal diseases for this pet, that’s becoming more popular than dogs for needing less care 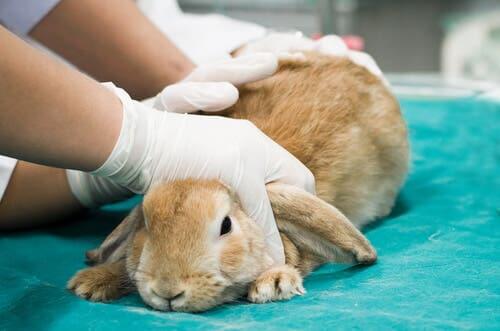 More and more families are choosing to adopt a rabbit because they need less work than a dog. For one thing, they don’t need to go out for walks. However, they do need specific care, such as vaccines. Do you want to know which vaccines are for rabbits and when they need them? We’ll tell you!

What are rabbit vaccines?

There are two types for rabbits: mandatory and recommended. The latter may vary from country to country, so you should ask your vet what’s recommended.

The two vaccines that rabbits need are for myxomatosis and hemorrhagic disease. Both diseases show a 100% mortality, meaning no animal has been survived either.

During the 1970s, there was an outbreak of this disease in Spain that took the lives of hundreds of thousands of rabbits and also nearly caused the disappearance of the Iberian lynx. Even today there’s an epidemic of the disease in wild rabbits, so the myxomatosis vaccine is extremely necessary.

The vaccine for rabbits from viral hemorrhage

This is a disease that evolves extremely rapidly, and can be fatal. The incubation period is around three days, it then suddenly appears and can take the animal’s life within 12 to 36 hours.

This happens because the disease evolves in such a way that it produces necropsies in the internal tissues, which are impossible to detect. The vaccine is essential to prevent this deadly disease.

When a rabbit can be vaccinated

A rabbit can only be vaccinated after it turns two months of age. Because both vaccines are strong, vets suggest that there needs to be a two-week gap between the vaccines. When they’ve been administered at the same time, there have been adverse problems for the animal.

If the vet administers both at the same time, especially in dwarf rabbits, they may develop the disease they’re intended to fight against.

How often do the vaccines need to be administered?

After the first doses, the rabbit will need the myxomatosis dose every six months and hemorrhagic disease every twelve months. The best time to do this is in spring because there’s an increase in the number of these diseases in the summer.

It’s best to talk to your vet because, depending on the species of rabbit and where you live, there’ll be a greater or lesser susceptibility to contagion. They may also recommend the most appropriate myxomatosis vaccine because there are two different ones.

If the rabbit lives in a field area or is in contact with wild rabbits, the myxomatosis vaccine will need to be given about four times a year, that is, every three months.

Other vaccines for rabbits

If several rabbits are living together, they’ll need to be vaccinated against bacterial respiratory diseases. However, this disease isn’t fatal and can be treated with medication.

Find out about the most common rabbit diseases in your country. Talk to your vet about which are the most necessary, especially if several rabbits are living together.

If you stay on top of your rabbit’s vaccines, you shouldn’t have any problems and your companion will be around for a long time.

Tips For Socializing Pet Rabbits
These animals can be much more territorial with one another than you may think. Today we'll tell you all you need to know about socializing pet rabbits. Read more »
Link copied!
Interesting Articles
Rabbits
How to Choose and Look After a Rabbit