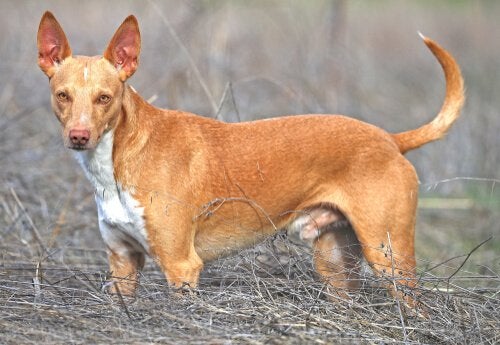 Podencos belong to ancient dog breeds that originate from the Mediterranean basin. Among the different types of hounds, the Spanish Podenco stands out for being a true all-around hunter.

Although this breed is not well-known outside the Iberian Penninsula, this Spanish hound is considered to be the best dog breed for hunting in Spain. Their strong, resistant bodies allow them to give an exceptional performance while hunting, even in rough terrain and rough weather.

This versatile animal can hunt alone or in a pack without maintaining a high level of performance. Below, you can learn more about Podenco dogs and, in particular, the Spanish Podenco.

The Spanish Podenco and different types of hounds

There are several types or breeds of Podencos that originated from the Mediterranean. Currently, there are recognized breeds of Podencos from Spain (Andalucía, the Canary Islands, and Mallorca), Italy (Malta), Portugal, and Greece.

The Spanish Podenco is one of the most recognized breeds in Spain. However, they’re not recognized by the WCO (World Canine Organization). Many breeders continue dedicating themselves to making it an official breed.

In addition, there are other Podencos created in Spain, such as the Andalusian Podenco (from Andalusia), the Ibizan hound (from Mallorca), and the Canarian hound (from the Canary Islands). Not to mention that there are Podencos from other countries that also have excellent hunting instincts. These are some types of Podencos that originate outside of the Spanish territory:

The term “podenco” refers to several dog breeds that are related by origin and share physical and behavioral traits. According to the WCO, these dogs are classified in group 5 (Spitz and Primitive type dogs). However, the Pharaoh hound is classified in section 6 of this group (primitive dogs).

Little is known about the origins of Podencos. However, experts believe that the Tesem is their ancestor. This hunting dog is extinct, but there are hieroglyphics of them in the Great Pyramid of Giza. If the Tesem may have arrived in Europe, then most likely it would have been due to the commercial expansions of the Phoenicians.

These hounds are medium to large-size dogs with a strong body and well-developed muscles. There is some variety in the size of some breeds, such as the Portuguese Podenco.

The personality of Podencos

Created for hunting, Podencos have very developed senses and are always alert. They are active and independent, very intelligent and respond well to training.

In general, the Spanish Podenco has a good temper and is patient. However, they have a lot of energy and require lots of physical exercise and constant mental stimulation.

A lack of exercise is extremely harmful to these dogs’ physical and mental health, especially because they can be prone to psychological problems, such as destructiveness, excessive barking, and aggressiveness.

As pets, hounds are recommended for active people who enjoy the outdoors. They can also get along very well with children, provided they have been properly trained and socialized.

The health of the Spanish Podenco

The Spanish Podenco stands out not just for their impressive hunting instincts, but also for their excellent health. These dogs are very resistant to diseases and demonstrate a great ability of adaptation, which is why they have been able to survive for many centuries.

In addition, breeders haven’t tried to subject the Podenco to the processes of aesthetic standardization that has affected many dog breeds. This is because historically people value their instincts more than their physical appearance.

Nevertheless, this breed has more genetic variations than other breeds, which means they have good health. In addition to their incredible physical endurance, they also have a strong immune system. With proper care, a Podenco hardly ever gets sick and can live a minimum of 12 years. This is slightly above average for a dog’s lifespan.

Another advantage of their genetic diversity is that they’re prone to develop certain hereditary diseases. Therefore, Podencos have a low probability of developing degenerative diseases that are common in other breeds, such as hip or elbow dysplasia.

However, it’s important to remember that Podencos require care and a positive environment to properly develop. In addition,  preventative medicine is key to preserve good health throughout their lives.