Three Puppies have Survived after a Hotel was Buried in Italy 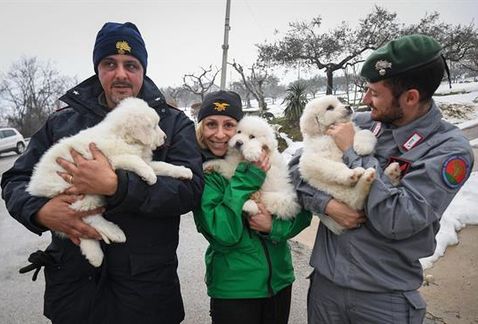 Press report news of an avalanche in central Italy. Rescuers searched for the missing among the ruins of the Rigopiano Hotel. Buried by the avalanche, they found 3 puppies alive. Let’s learn more about their story.

The news has also been shared by local media. The 3 mastiff puppies were found by the carabineros (militarized police) in the boiler room of the hotel. In this hotel, eleven people are safe, whilst 9 people have lost their lives, and twenty-one are still missing.

An ongoing investigation into the surviving puppies

The prosecutor in charge of the file, Cristina Tedeschini, informs the press that an investigation has been opened. This will look into all aspects of the avalanche and includes the hotel construction.

The hotel is located at an altitude of 1,300 meters. It is not yet known why it has been completely blocked by the intense snowfall that fell in the area, last week.

As the puppies have been found alive there is reason for celebration. Other life laying amidst the ruins, may exist, even five days after the event.

The moment of rescue

A member of the emergency team recounted the moment of the puppies rescue. According to his words: “It was difficult to find them because they were hidden. Then, we heard this soft bark, and we could see them through the small hole that firemen had opened in the wall. We enlarged the hole and took them out.”

Stray dogs are found in all countries. Generally this is due to irresponsibility of their former owners. More and more people and groups are coming together to help combat this problem.

In our day-to-day lives, we see very unpleasant stories of dogs. The most common case is that of abandonment.

Tips on how to approach abandoned dogs