In many countries, there’s a legal void regarding the possession of the common sandfish as a pet. Due to this, people take this animal from its natural habitat to sell it. 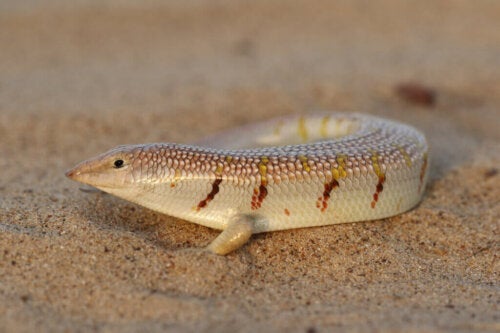 The common sandfish (Scincus scincus) is an animal that recently became a popular exotic pet. It’s not a fish at all – it’s a reptile. Reptile lovers admire it due to its way of moving in the sand like a fish, as it dives and swims in the sand as if it were water.

This animal inhabits deserts such as the Sahara and also the desert and arid areas of Saudi Arabia, Iraq, and Iran. They’re easy reptiles to keep in captivity. In fact, they spend most of their time buried in the sand of their terrarium. Below, we’ll tell you about the optimal maintenance conditions for this elusive reptile.

This is a really striking animal due to its elongated body, short legs, and skin color. In fact, the common sandfish (Scincus scincus) is a rare species. The International Union for Conservation of Nature (IUCN) hasn’t yet been able to report on its current state of conservation, as this species is difficult to monitor.

Similarly, the CITES Convention doesn’t include this species in any of its annexes due to a total lack of information. In addition, this species rarely breeds in captivity, and there is no valid data on how it reproduces. In fact, experts aren’t sure whether the females lay eggs or give birth to live young.

Neither do experts know whether the species procreates through parthenogenesis.

Thus, the common sandfish is sold in stores or by individuals that take it from its natural habitat instead of being bred in captivity. As such, buying a common sandfish is synonymous with supporting the illegal trade of species and all that it entails.

Captive care of the common sandfish

Although this animal can’t be bred in captivity, and the probabilities of this occurring are minimal due to the lack of information in this regard, it’s still easy to care for at home. As long as you provide it with everything it needs, the common sandfish will thrive in its terrarium.

Although Scincus scincus spends most of its life buried under the sand, it’s active at night and looks for food or a mate. As it can measure up to seven inches in length, it’s essential for the terrarium to be big enough.

The terrarium should be 29 x 11 x 11 (length, width, and height), approximately the size of a 75-liter capacity fish tank. The terrarium must be protected with a lid to prevent the animal from escaping.

The substrate of the terrarium must be composed exclusively of fine sand and must be about two inches deep. This is because the common sandfish usually doesn’t bury itself more than one inch. However, it spends most of its time buried.

Some types of sand, composed of calcium carbonate, are digestible for reptiles after accidental swallowing. This will always be the best substrate option, as you’ll be able to avoid long-term unwanted problems.

On the other hand, it’s a good idea to place artificial or natural plants, such as cacti and succulents, that withstand a lack of water well. You should also consider placing caves and rocks to serve as hiding places.

This animal comes from desert climates. Although it can withstand very high temperatures, it’s best for the temperature inside the terrarium not to exceed 95°F. The optimal temperature range for this species is between 73 and 80°F. At night, when the light bulb is off, the temperature should drop to approximately 70°F.

Heat and light are two other environmental factors you should take into account. You need to install an ultraviolet light lamp, which you should change approximately every six months. In addition, a heat bulb and a cold light bulb are necessary to help the animal distinguish between day and night.

The last factor you need to consider is humidity. You must keep it below 30%. This means that you should only place plants such as cacti or succulents or other drought-tolerant plants.

Feeding of the common sandfish

The common sandfish is an insectivore, as its diet is based on insects. It has the ability to detect the small vibrations that these animals produce when they walk on sand. As such, these reptiles are good hunters. You should never feed your common sandfish more insects than it can eat in 10 minutes.

According to the information several owners have provided, these animals can also occasionally eat leaves and vegetables, which provide a little more water. Nevertheless, it’s a good idea for you to place a small pot of water inside the terrarium so that your common sandfish can drink whenever it needs to.

As we explained in this article, the common sandfish requires similar care to other desert lizards. The main difference is the difficult captive breeding, which is why people take this animal from its natural habitat. Therefore, a person will decide whether to buy one depending on their personal values.

Salmonellosis and Reptiles
Salmonellosis and reptiles are closely linked. The bacteria Salmonella is present in many of these animals even if they're healthy and it can be easily transmitted to humans. Read more »
Link copied!
Interesting Articles
Tortoises and Reptiles
Chinese Water Dragon: Breeding and Care