Insectivorous micromammals are those mammals that are small and that feed on insects. While many times insects are not enough to satisfy these animals completely, they still make up the bulk of their diet. 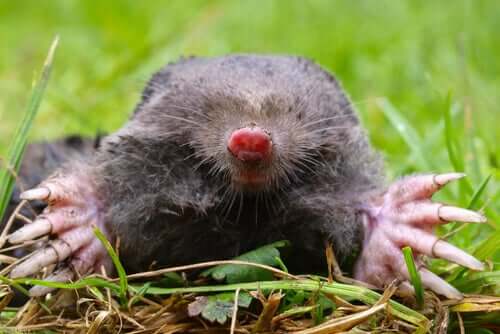 Insectivorous micromammals don’t necessarily feed exclusively on insects. Rather, they may also consume worms, fish, or vegetables. Many of these small mammals depend on insects as a fundamental part of their diet.

However, there are others that have a more varied diet which they supplement with insect protein. This is especially true during the breeding season.

These animals make up one of the most numerous mammal groups in the world. Their tiny size and their prolific nature mean that they multiply with great ease.

Almost all insectivorous micromammals are nocturnal, meaning they’re most active during the night. Therefore, their sight tends not to be very sharp. However, they possess certain defense mechanisms that make up for their poor vision. For example, quills or glands that secrete unpleasant substances, both of which come in handy while in the dark.

What insectivorous micromammals can we find in nature?

The numerous varieties of shrews

From the common shrew, to the greater white-toothed shrew –Crocidura russula–, to the Eurasian pygmy shrew (Sorex minutes), and many other species… These small mammals make up a very diverse group of animals.

One of the most interesting facts about shrews has to do with their young. When baby shrews open their eyes and grow fur, they leave their nests and walk in lockstep. In other words, baby shrews grab onto the tail of the shrew in front of it.

The Talpidae family: Another group of insectivorous mammals

The most popular representative of this family of mammals is the mole. We recognize these animals by their teeth, their robust and semicylindrical trunks, and the powerful claws that they use for digging.

Moles live in complete darkness and, therefore, have very tiny and sometimes even nonexistent eyes. Moles are so ravenous that they die if they go more than 12 hours without eating. In fact, they must eat three times their weight in food each day.

One of the strangest species in the Talpidae family is the star-nosed mole (Condylura cristata) which resides in North America. Their long snouts end in a disc surrounded by flesh-colored tentacles. This strange and somewhat grotesque appendix opens, closes, curls, and shakes. These moles use their unique snouts in order to feel their way around and detect the presence of worms and larvae that they can use as food.

Excellent swimmers, they live near rivers and swamps, using their wide feet as oars.

The peculiar case of hedgehogs

Hedgehogs have a body that’s protected by long and dense quills. So, when these animals curl up, they turn into a ball of spines that protect the most vulnerable parts of their bodies from predators.

This, which could easily make them seem like defenseless little animals, contrasts greatly with the fact that they are a terror to snakes:

They’re able to crush their heads and devour snakes completely even before they stop wriggling around.

The Hispaniolan solenodon, one of the most interesting insectivorous micromammals

The Hispaniolan solenodon–Solenodon paradoxus– is endemic to the Dominican Republic and Haiti and is in danger of extinction. It looks very strange, as it has a very strange look – similar to a fat rat as far as size and appearance, but it has a snout that’s very long for such a short trunk.

The fur of the Hispaniolian solenodon is yellow at the front and black at the back. This animal sleeps hidden during the day and comes out at sunset in order to hunt worms, insects, amphibians, mollusks, etc. It destroys its prey with its claws before putting them in its mouth, emitting terrifying screeches.

Insectivorous micromammals of the Iberian Peninsula

The Pyrenean desman (Galemys pyrenaicus) looks like a shrew but actually belongs to the mole family. However, these little mammals have certain anatomical features that set them apart from moles. For example, their feet are partially webbed.

The Pyrenean desman is an aquatic insectivore that lives along rivers and torrents and on the shores of lakes and ponds of the Iberian Peninsula. It uses other animals’ dens because it’s unable to dig for itself.

The five groups of insectivorous micromammals that we mentioned in today’s article are very widespread in nature. What’s more, they’re very important on an ecological level because they make up part of the planet’s biodiversity. In addition, they also help to keep insect plagues under control.

However, the problem is that they themselves also have the potential to become a plague, given their great capacity to reproduce.

9 Omnivores
Omnivores have bodies that can adapt to a mixed diet. That is, they can be "vegetarian" and "carnivorous". This article discusses 9 omnivores in detail Read more »
Link copied!
Interesting Articles
Mammals
Characteristics and Behavior of the Capuchin Monkey