This small mammal -- that's increasingly becoming popular as a pet, has a life expectancy of eight years. Despite its sympathetic appearance, it's a territorial creature that will defend himself with his quills when he feels threatened. So, it's important to get this animal used to humans as of a young age 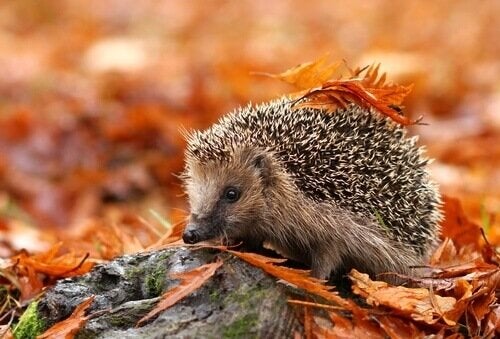 This animal is quite a charming pet that has become popular in recent years. One of the reasons for this could be due to all the attention it’s getting from some international companies’ TV ads. Below, you can find some facts about hedgehogs.

When it comes to hedgehogs, their quills are its most well-known feature, and also what humans fear the most about them. However, that fear disappears when we see their sweet faces and the cute twinkle they have in their eyes.

Another fact that you should know about hedgehogs is that their quills are nothing more than hollow hairs with a keratin coating, which gives them their rigid appearance. Despite a lot of myths about them, they cannot shoot them out as if they were darts. And, of course, they aren’t poisonous.

This animal’s eyes are separated wide apart from their snout. The tip of their little nose is what makes them even cuter. These animals are usually brown or black, depending on the kind of hedgehog.

Their ears are small, pointy, and have a rounded tip that is located on the sides of the small, spiked crest that crowns their heads. A hedgehog’s chest, legs, and hands are pink and practically hairless.

Feeding a Hedgehog and their habitat

One of the most common questions about hedgehogs has to do with their diet. These animals are vegetarians and their diet is based mainly on insects, fruits and vegetables. They can also eat cat food because it’s easy for them to digest.

Their natural habitats and places of origin are in Europe, Asia, and Africa. However, since they are becoming very popular pets, they have expanded to other continents. So, hedgehogs can be found in almost any corner of the world.

The demand for this animal as a pet has caused the species’ population to increase. Of course, there are always two sides to everything, but there is no reason get into that now.

Although they may not look like they, hedgehogs are territorial animals, like dogs and cats. If his territory is threatened, he’ll use his best weapon: his quills.

Plus, hedgehogs are independent creatures. This is something you should keep in mind if you’re considering adopting one as a pet. These animals really don’t like being part of a family, especially if one is adopted as an adult. That’s why it is suggested that you adopt them when they’re babies so they can become accustomed to a more social and family life.

Being rolled up in a ball is, without a doubt, a hedgehog’s most well-known trait. They can roll up into a small ball thanks to the flexibility of their particular and orbicular muscles. It’s also one of the ways that they defend themselves. So, don’t be surprised if your hedgehog does this when you’re trying to catch him. Until he trusts you, he won’t unroll himself.

Just like hamsters, hedgehogs are also excellent climbers.  This is important to keep in mind when you’re buying a cage because it should have a lid on it.

Types of hedgehogs to have as pets

Not all hedgehogs are good pets or are even allowed to be. The most common are the pygmy or Egyptian hedgehogs, but there are others that can also be adopted. Here rea a few of them:

These are just some types, but there are many more that can be adopted. If you decide to bring a hedgehog into your life, make sure the one you’re going to adopt is legal in your country.

They have a life expectancy of 8 years, regardless of whether they live in a domestic environment as a pet or in the wild. If you decide to get one, you’ll see that your hedgehog can be a good pet if he can adapt to a family life. Having a pet that’s from all the others is quite fun, you’ll see!

We've seen hundreds, maybe even thousands, of pictures of beautiful dogs and cats on the internet. Some of them are…

Animals
The Best Birds to Have as Pets

Other Pets
Can you have a hedgehog as a pet?

Different animals are becoming more trendy to have as pets. The days of only having cats or dogs are gone…