The Solenodon, a Living Fossil

The solenodon is a panchronic organism that hasn't changed much in the last 60 million years. It's also one of the few poisonous mammals that exists on the planet. 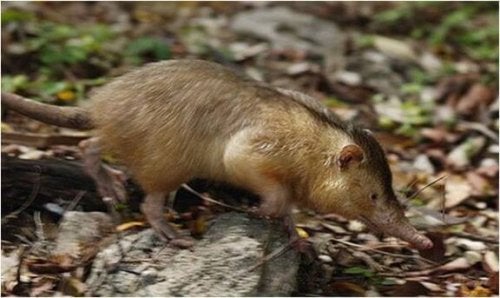 Solenodon (Solenodon paradoxus) is a genus of placental mammals from the Soricomorpha order, and the only one from the Solendontidae family. It’s an endemic to the island of the Dominican Republic and Haiti, as well as Cuba.

It’s a panchronic species, since almost nothing about it has changed in the past 60 million years. There were also two other species that have since become extinct.

This species belongs to the same family as shrews and moles, but it’s much larger. It gets its scientific name, solenodon, because of its grooved teeth.

The solenodon’s characteristics and habitats

The solenodon is a species native to the Americas. It only lives in the Caribbean on the islands of Cuba, the Dominican Republic, and Haiti. They generally inhabit wooded areas where they can make their burrows or tunnels. They construct these between tree roots, under rocks or in hollow trunks.

The solenodon’s coat is dark brown or black, but its shoulders and snout are white or a slightly yellow color. Its tail, extremities and the tips of its ears don’t have any hair. Its head is characterized by a long snout, similar to a small trunk, and its eyes are small and bright.

It can measure up to 60 centimeters and weigh up to two kilograms. It has claws at the end of its limbs with five very strong fingers that it uses to dig. In addition to its snout, it has a long, flexible trunk containing 40 sharp, strong teeth.

The solenodon is more active at night and spends its days sleeping. It likes to be alone and is very elusive. Although it moves rather strangely, making an awkward zigzag motion, it’s actually very quick. It moves this way so as not to be as easy prey for predators.

The solenodon makes sounds that are similar to those of other animals when it’s afraid. To communicate among themselves, they make sounds similar to those of birds (squawks). It has terrible vision; so bad that it’s considered to be almost blind. However, it has an incredibly well-developed sense of smell. This allows it to maneuver itself around to take care of its daily tasks.

Females have two mammary glands that are located very close to the base of their tails. They also have glands in their groin and armpits. They release an unpleasant odor from these glands to scare away their enemies.

The solenodon is one of the few poisonous mammals. On each side of its lower jaw, it has a second incisor with a poisonous gland. This gland releases poison that it uses to defend itself from its enemies and kill its prey. It can even use the poison to kill off other males when mating. The poison isn’t lethal for humans, but it does cause considerable pain.

The solenodon is an insectivorous animal, meaning that it feeds mainly on insects. However, insects aren’t the only things they eat. They sometimes complement their diet with small reptiles, worms, crabs, frogs and even fruit. It uses its sense of smell and its claws to get its food. It finds its prey by digging or by destroying rotten logs.

Males face the possibility of death when mating with females. Once the gestation period is over, the female can have two litters each year. She can have between one and three offspring weighing between 40 and 55 grams at birth.

If she gives birth to three pups, only two will survive since the mother only has two mammary glands. The mother will usually suckle her offspring for 75 days. During this period, they may become independent or choose to stay in the maternal burrow for longer.

The solenodon is listed as an endangered species by the International Union for the Conservation of Nature (IUCN). This is mainly due to the destruction of its natural habitat and its low reproduction rate.

These are the just the main current threats to the solenodon. However, other species being introduced to their areas, like dogs, ferrets, cats, and others, have also contributed to their population decrease.