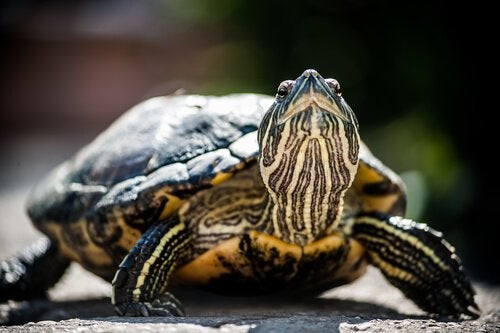 Turtles are reptiles that walked the Earth around 200 million years ago. There are two types of turtles: aquatic and land. Unfortunately, today there are species of turtles that are in danger of extinction.

Habitat destruction and human carelessness have put them on the verge of extinction. Continue reading to learn about the causes and reasons why turtles are becoming endangered.

Turtles are becoming a threatened species everywhere. Whether it’s because of habitat damage, presence of predators, or the usual main cause: human handling and being used as trophies and toys.

Many countries have prohibited selling turtles. Spain is part of the catalog for fauna under special protection system that has 439 species.

Turtles can either dwell on land or in the water, it all depends on where they are born, eat, move, reproduce, and die. These animals are reptiles, and their size varies according to the breed. They can live an average of 70 years, although there are land sub-species that live up to 100 years old.

The land turtles have different traits than ones that live in the water. Land turtles live longer, their legs are more developed, and they have a rough shell. On the other hand, water turtles have special membranes for swimming, and their shell is smooth. Currently both types are in danger of extinction.

On the Iberian Peninsula, the most threatened species is the Greek tortoise, or Spur-thighed Tortoise. It lives mostly in the Southern Murcia and the Northern Almería, in Huelva (Doñana), and Majorca.

The reasons why it’s endangered is due to forest fires, the spread of agriculture, and uncontrolled urban development. These practices damage their natural habitat and leads them on to extinction.

Six of the seven main ocean-dwelling turtle species are in danger of becoming extinct. Right now these turtles’ situation is so critical that they have a high probability of disappearing from the planet.

What are the threatened species?

Humans highly desire their shells in order to make decorative art, jewelry, among other products.

Although, commercialization of this animal was prohibited in 1994, people continue smuggling and trafficking them in places like the British Isles, Cayman Islands, and the Dominican Republic. In addition, many countries consider their meat as a delicacy.

This is the smallest species, and their biggest threats are illegal business and egg poaching.

This is one of the endangered sub-species because of being captured, collisions with boats, or accidents.  Humans highly desire these turtles, which is why they are in a vulnerable situation.

Green sea turtles live in the tropical and subtropical waters of the Mediterranean. Their name comes from the color of their skin, which is green due to their seaweed-based diet.

They live in the Pacific, and although there are around 20 to 30 thousand females, their extinction is dangerously approaching.

Scientists calculate that their extinction can happen within the next 30 years. Accidental fishing in nets, people digging up their eggs, ingestion of plastics, and loss of habitat are the main reasons why these animals are on the brink of extinction.

The threat of extinction for this sub-species is growing. The main causes are human development on the coastline, which causes them to lose the habitat where they lay their eggs. Likewise, these turtles are victims of accidental fishing.

The most representative region for this type of turtle is the Eastern Mediterranean. In this area, where the egg laying takes place, the influx of tourists threatens their reproduction. Fishing equipment that have trawl nets and purse seines used by fishing companies also pose a threat to the Loggerhead sea turtle.

This endangered turtle sub-species got its name due to the color of its shell. As in most cases, it is endangered because of fishing systems, people digging up their eggs, and poaching of adult turtles.

How to protect them?

As usual, the main threats for turtles are human beings.

To protect them from extinction, we should: