Dwarfism in Nature: Causes and Characteristics

Dwarfism in nature is a lot more common than we think. It can be the result of genetic factors, but it's also due to environmental factors. What are the most common miniature species? 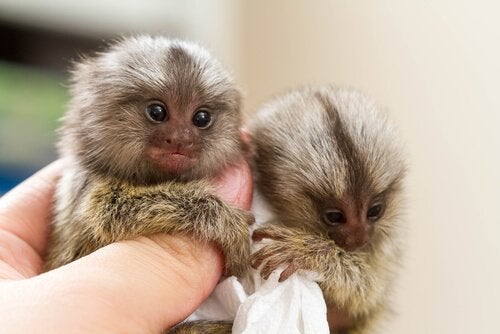 Dwarfism is a natural phenomenon that seems a bit unusual. Rarely do humans take the time to think about why dwarfism in nature occurs more frequently in humans than in any other animal species.

Have you ever wondered why animals come in different sizes? In the wild, size is key for the survival of a species. For this reason, the size of an animal is intricately linked to the role it plays within the ecosystem.

For example, in colder climates animals are usually larger in order to conserve body heat. However, in warmer climates, animals are smaller.

This way, the size of a predator or prey can become its greatest strength. Because of this, it’s no secret that successful mating does depend on the size of a specimen.

What’s the reason why some species get smaller? Is there an explanation for dwarfism in nature?

Common causes of dwarfism in nature

Dwarfism is a phenomenon through which a living being’s size differs from the average size of other individuals of its own species. In humans, it’s easy to determine that someone has dwarfism simply by looking at them.

Furthermore, dwarfism in humans is widely studied by the scientific community. Currently, several studies claim that there are three metabolic and physiological reasons that give rise to dwarfism.

According to experts, this phenomenon may be due to either a genetic predisposition, hormonal imbalances, or nutritional deficiencies. Even though there are forms of dwarfism throughout the animal and plant kingdoms, the causes are not always the same in humans and animals.

In humans, three out of four cases of dwarfism are due to achondroplasia, a genetic mutation. This mutation alters the proportion between the extremities and the torso of a person. While the midriff is similar in size to the rest of the species, the limbs are a lot shorter.

Dwarfism resulting from genetic mutations or hormonal imbalances is rare in animals. However, cases of dwarfism in the wild, due to achondroplasia, do exist and we’re about to show you a few examples here.

Dwarfism by achondroplasia is very common in certain dog breeds. The Dachshund, as well as Bulldogs and Basset Hounds, are breeds that evolved by genetic dwarfism. This kind of dwarfing shortened their legs, although their midriffs are still of average size and in proportion to their heads.

Being a genetic condition, these races are often ailed by all kinds of health problems. In addition to their genetic dwarfism, these breeds commonly have vision problems.

There’s another cause for dwarfism that’s not related to metabolic or physiological traits. Within the animal kingdom, evolutionary dwarfism is also known as insular dwarfism. This is the most common type of dwarfism in wild animals. Believe it or not, dwarfism is present in most species on our planet.

Insular dwarfism is an evolutionary process by which the size of a species varies according to the natural resources within its reach. Thus, in isolated or difficult-to-access habitats, animals had to get smaller in order to survive.

In areas where food sources are scarce there is a clear advantage in having a smaller body. For this reason, in habitats that are difficult to access and with limited mobility, prey and predators evolved by decreasing in size.

Some of the species that are now miniatures in their wild habitat are the Borneo pygmy elephant, the pygmy marmoset, and the West African dwarf goats. Many of these smaller scale animals are incredibly cute. Their peculiar size makes them look unreal, almost like toys.

The Borneo pygmy elephants and pygmy hippopotamus are considerably smaller than their average counterparts. However, their size is still quite large in comparison to us humans. For example, an adult Borneo elephant can weigh about 5.5 tons.

These are specimens that only reach half the size of an average adult goat. (There are videos of dwarf goats online that have the purpose of relaxing and de-stressing people.)

One of the most acute cases of dwarfism in nature is that of the pygmy marmoset. One of these tiny monkeys weighs only about 3.5 ounces. A pygmy marmoset is smaller than the size of the palm of an average adult human hand.

Currently, a lot of humans are unhealthily attracted to anything that is out of the ordinary and, of course, this includes a fascination with dwarfism. A lot of people with money constantly seek the most extreme cases of pygmy animals to “own” and show off.

Please keep in mind that, although they’re cute, miniature animals are not toys for anyone to play with and mishandle. They’re living beings with feelings and shouldn’t be handled by children unless they’re supervised by a responsible adult. If your kids don’t know how to be kind to them, teach them how.

Dog Breeds with Short Legs
These dogs have short legs due to the mutation of a gene that caused a lack of a protein that controls the development of the extremities. Read more »