There are frequent diseases in competition horses. This is because they're subjected to intense efforts for which their locomotor system doesn't prepare and it takes a toll on their health and racing. 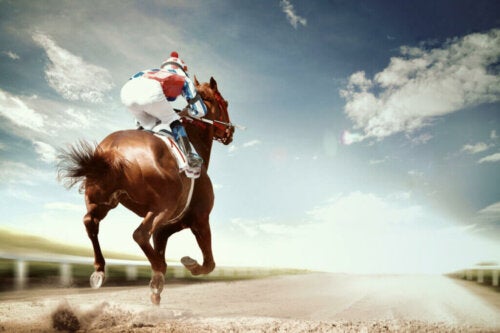 The frequent diseases in competition horses are due to various factors that make them prone to problems in their locomotor system. Usually, these kinds of animals are specialized, fast-growing breeds with a genetic tendency to these diseases. In fact, it’s precisely the constant extraneous effort that promotes them.

As graceful and tough as they may seem, horses can quickly get sick if their owners don’t care for them properly. Continue reading to find out what are the most common pathologies in competition horses and how to prevent them.

Hoof injuries are among the most common diseases in competition horses

Hooves may just be the most important part of the anatomy of any running animal and those of racehorses are continuously subjected to:

Any disease that affects the hooves will interrupt an animal’s training, be it injuries, abscesses, blows, etc. The approach to the pathology can get complicated as anti-doping control makes it impossible to administer drugs systematically, including anti-inflammatory drugs.

Next, we’ll discuss the most frequent bone and joint injuries in these types of animals.

Longitudinal fractures are the most common and they usually appear abruptly at the end of a demanding training session or a race. It’s common for these injuries to worsen; in fact, they could even compromise the interphalangeal joints.

Comminuted fractures (two or more fragments) are even more complicated. It’s possible to treat them with surgery or with immobilization, but the athletic life of the animal is pretty much over.

As the name suggests, this is an inflammation of the sesamoid bones, the auxiliary bones that help support the fetlock. This condition is quite common in racehorses due to overexposure of the limbs to effort. The problem tends to reappear after resuming training despite rest. So you must identify the underlying cause — it could be a conformation fault.

One of the complications of sesamoiditis is the fracture of these bones due to excessive traction. There’ll be a total loss of support for the fetlock if both bones are affected.

The rapid surgical intervention predicts a fairly favorable prognosis. However, the animal won’t be able to resume athletic activity if the suspensory ligament is torn.

This name encompasses a series of injuries to the metacarpal bones, which are typical of younger racehorses. These injuries derive from continued exercise, which continually inflames the bone and periosteum. It results in bone microfractures, hemorrhages, and, finally, the formation of a bone callus. It’s hard for a limb in these conditions to recover.

Prevention is the best remedy for this disease. For example, don’t train animals when they’re too young as their skeleton is still developing.

This refers to the inflammation of the tendons, in this case, the superficial and deep digital flexor. Generally, the cause is stretching due to mechanical stress.

The first symptom is inflammation in the area, known as “bowed tendons.” It doesn’t always lead to lameness so it often goes unnoticed by the caregiver. This is a problem, as the horse will continue to train and their injury will worsen, which can lead to fibrosis. A fibrous tendon won’t have the same elasticity as a healthy one and will limit the horse’s athletic capabilities.

For this reason, the treatment must include gentle exercises, for example in a pool adapted for physiotherapy in large animals.

This is a disease of the development of articular cartilage and it’s relatively common in horses. Firstly, their cartilage grows weaker than usual and fragments with intense exercise. Then, the resulting fragments can become partially attached to the bone, or be loose, and float around the joint.

This condition is common in racehorses and affects the mobile joints, such as the carpus and fetlock. Thus, the overexertion of the joints promotes the degeneration of the articular cartilage and the synovial capsule. Furthermore, this sets off a vicious cycle of trauma and inflammation, leading to permanent joint damage.

Currently, there are treatments such as the use of hyaluronic acid precursors. These substances stimulate the natural regeneration of the joint.

Rhabdomyolysis is one of the most frequent diseases in competition horses

The origin of this condition is still unknown but there’s a common factor for many of the cases: there’s vigorous training after several days of rest with a diet rich in grain. The symptoms include:

Finally, there are many treatments and most of them can correct poor muscle conditions. This is the case of vitamins B1 and E, selenium, anti-inflammatories, and muscle relaxants.

All disciplines that include a horse--or several horses--are known as equestrian sports. They can involve speed, jumping, balls, traction, or…