The Ten Most Used Draft Horse Breeds around the World

The draft horse breeds we know are quite different from those of the early 1900s. These days people keep them as a hobby and not as an economic part of the family income. 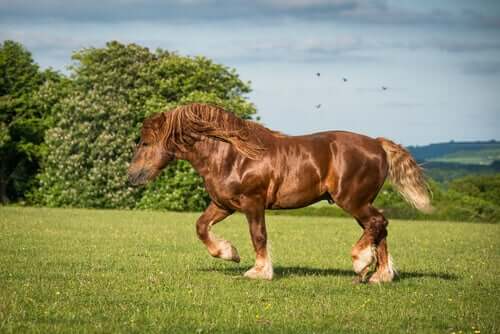 Draft horse breeds, as we know them today, didn’t exist until the 18th century. This is because people created the breed to fulfill military, agricultural and industrial needs. Currently, their value is due to their strength and towing capacity. Generally, these horses can weigh up to 2200 lbs and need proper care and food. So, continue reading to find out what are the 10 most used draft horse breeds.

Origin and utility of the draft horse breeds

In the past, draft horses served as a driving force. However, due to their resistance and height, people began to use them in agricultural activities. Generally for pulling buggies, carts, and carriages. So, the bigger horses moved heavy machinery while the lighter ones drove carriages.
Even today, people value draft horse races for their characteristics. In fact, we divide them into heavy and light draft horses and there are several kinds. So, continue reading to find out more about their conception and main features.

This English horse is the largest one in the world. It weighs between 1700 and 2200 lbs and can reach a height of 5 to 6 feet. This is why people used them for draining marshes. These horses grew up along with, and bred with, Dutch horses.
They have a big head, a short neck, a short loin, and rump and their limbs are wide and thick. Also, they’re great for agricultural work and heavy-duty traction.

These horses are from Belgium but inhabit the USA and Canada. With a well developed and solid body, they’re especially used for moving large loads.

This animal is a breed the originates from horses from the hills of Perche, France, and draft horse breeds. It’s the best-known breed of all. The oldest ones were already around during the Crusades. The Europeans exported it to the USA in 1839 as farmers value it highly there. Currently, this horse serves a purpose in recreational activities, fairs, and competitions.
This animal stands out due to its physical qualities. It’s agile, powerful and has high endurance. Its neck is short with a strong head and limbs. There are two types:

This is an interesting draft horse breed. It’s the result of a cross between Flemish animals and heavy-shot mares from Scotland. They improved the breed by crossing it with Shire and Arabic. This is the reason why they’re more striking and their joints robust. These horses are as strong the Shire.

This is a very old breed of horse. They were born in the mountain region of the Ardennes, on the border between France and Belgium. These horses are strong and willing. For this reason, people in Napoleonic times liked them; mostly for their ability for fast trotting and artillery use. Generally, they’re medium weight and have a small head, a short and thick neck, and short limbs.

This breed has been around since the Middle Ages, and comes from the region of Brittany and France. They’re the result of a cross between Arabian, German, and thoroughbred breeds. Thus, their strength and lightness make them special for fieldwork and semi-fast drafting.

There are three subtypes of Bretons from different areas of Brittany. Also, they’re characterized by their diverse resistance and their quiet life.

A breed native to the county that bears its name, it’s the result of a selection of native breeds. People used them for farm work because of their abilities and docility. Currently, their population is in decline. They weigh over 1500 lbs and have short loins and limbs, and a long and wide rump. Also, they live long lives and don’t need too much food to survive.

This is the result of a cross with the Pastier-Breton and is a smaller and more active breed. They’re between 4 1/2 to over 5 feet tall and have a robust body, strong shoulders, a blond tail, and muscular legs. People use them on their farms because they have a calm demeanor and are strong.

These animals have a strong personality and are over 5 feet tall; they’re indefatigable. This is because they have Scandinavian blood and are therefore destined for farm work. There are three types:

Most of the characteristics of this breed come from Arabian horses and barbers. However, they’re native to Boulogne, France. They differ from others of its kind in that they’re both resistant and striking. In addition, they’re quite large and can weigh up to 1900 pounds, and people use them for slow dragging.