Some Amazing Species of Crustaceans

Some of them appear on the menus of high-class restaurants, but as living creatures they're absolutely fascinating. 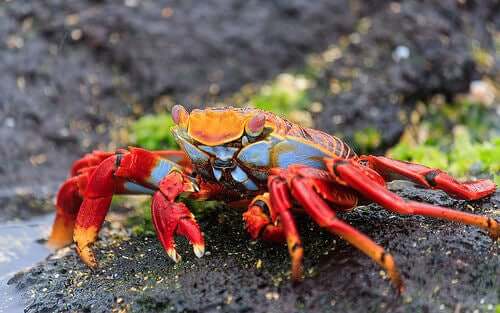 There are no fewer than 67,000 different species of crustaceans in total. Most of them are aquatic and live in seas, rivers, and lakes. Just as insects seem to rule over the land, crustaceans rule the waters. Find out more about them in this article.

Crustaceans can vary in size from 100 microns to 13 feet across. But in either case, their bodies are made up of ‘segments’ that make up three distinct sections: the head (cephalon), thorax (pereion), and the abdomen (pleon).

Scientists have had to work hard to classify this large family, and, in the end, they have been grouped into six groups: Branchiopoda, Remipedia, Cephalocarida, Maxillopoda, Ostracoda, and Malacostraca. Some of these groups contain subgroups (13 in total).

Most of the species of crustaceans that we know belong to the Malacostraca group and the Eumalacostraca subgroup. We’ll tell you a little about them so that you can understand their characteristics a bit better:

The crab has five pairs of legs and the front two have become claws to capture food or impress a mate. They’re not great swimmers, but even though they live at the bottom of the sea, they can also move on land. They have an exoskeleton that acts as a shield and is renewed at certain stages during their lives.

These swimming crustaceans are pink with brown markings and have a semi-hard shell. Their eyes are large compared to their bodies, and they lead a quiet life, reproducing in spring, summer, and autumn. They can measure between five and six inches long and live in seas around the world, particularly in the Atlantic and Mediterranean.

Also known as a ‘doodlebug’ in some parts of the world, these live in dark and humid areas, such as under stones or rotten wood. They feed on the remains of plants and animals and reproduce using an abdominal sac where they incubate the eggs.

They have a rigid exoskeleton and seven pairs of legs. One of their most impressive features is the ability to curl up into a ball when they sense danger or if they live in a small space.

Their scientific name is Euphausiacea, and they can be found in every ocean in the world. They’re right at the start of the food chain, and they’re the favorite food of whales, seals, penguins, fish, and squid.

They migrate in groups during the day, and at night they stay closer to the surface of the water. Like other crustaceans, they have an exoskeleton made up of three sections. They also have compound eyes, two pairs of antennae, and several pairs of legs.

These are filtering crustaceans that live on hard surfaces, such as underwater rocks. They can also live on floating objects, and they depend on the movement of the waters to move around.

These crustaceans are well-known in restaurants and, like prawns and other edibles species, they have long, spiky antennae instead of claws. They live on rocks at the bottom of the sea and will use stones to hide themselves. They move using their many pairs of legs or swimming by contracting their abdomen.

Lobster larvae are flat and translucent and are carried away by ocean currents. As they grow, their exoskeleton renews which is very common in this family of crustaceans.

These are marine decapod crustaceans, and although they generally live in freshwater (rivers, lakes or lagoons), some also live in saltwater. They’re smaller than prawns and measure up to an inch and a half long. They have small legs, a compressed, cylindrical torso, a long tail, and a weak breastplate. They’re also semi-transparent and have jaws with fibrous edges.

6 Different Animals that Live in Caves
Bats aren't the only animals that live in caves. Today, we'll take a look at 6 different cave-dwelling animals and their habits. Read more »
Link copied!
Interesting Articles
Other Animals
The Strangest and Most Beautiful Animal Friendships