In the deepest parts of the oceans are countless unknown and strange animals, such as the deep sea chimera. 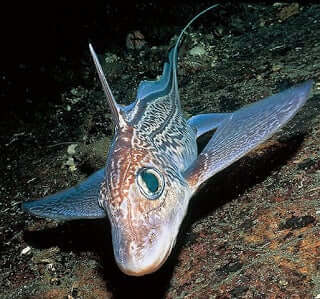 The deep-sea chimera is different in many aspects to other fish. This strange creature is found throughout the world, from 320 to 5500 feet deep. Occasionally in the summer it comes to the surface, but stays in the deep during winter when temperatures are lower.

Its appearance is quite striking. It has large eyes, its head is bigger than its body and it has a fairly long tail fin. And since it can measure between three and seven feet, it can be described as an “underwater monster”.

This strange animal is part of the chimeriforms group, an order of cartilaginous fish. Its skull is different from other deep-sea fish. For this reason, it now has its own subclass: the holocephalus. Other fish, known as “ghost sharks” join it in this subclass.

Currently, there are only 47 species of chimeriforms.

Characteristics of the deep sea chimera

These characteristics are what give it its name “chimera”, reminding people of monsters from Greek mythology that had body parts of different animals.

It can grow up to 6 feet 7 inches in length, most of this is thanks to its tail. Females are larger. Its body is devoid of scales, compressed laterally, developed in length and strongly thinned towards the tail

Its skeleton is cartilaginous, like sharks and rays. But it only has two gill openings, which are close to its bones.

Another of its most striking features is the spike on its spine. They use it as a weapon and can even poison predators with its venom.

Its sting is very painful but not fatal to humans unless they are allergic.

They feed on mollusks and other small animals found on the sea floor, such as crabs, shrimp, or starfish. It has very strong teeth.

They have pterygopodia that act as male external sexual organs. And sometimes, a small “pseudo-theropod” on its head, like some prehistoric sharks.

Males take advantage of this fleshy bulge between their eyes to hold females during intercourse.

The female deposits the spawn and buries it in the sand. Each egg is enclosed in a capsule covered in hair.

The Chimera Monster: the deep-sea chimera of your nightmares

It’s a type of chimera typical of the northeast Atlantic Ocean and the Mediterranean Sea. It seems to prefer the upper continental shelf between 984 and 1640 feet deep.

In the Mediterranean sea this species is found in depths of more than 330 feet, but it’s more easily found between 1640 and 2600 feet. There are specimen references at 2130 feet deep in the Balearic Sea, and 2625 feet deep in the Ionian Sea.

Fishermen often catch this fish and throw it back into the sea. However, little by little, it’s beginning to be commercialized.

Animal Protection Laws Around the World
In this article, we're going to tell you about animal protection laws around the world, and some of the history behind international animal rights. Read on! Read more »
Link copied!
Interesting Articles
Fish
Different Types of Water for Your Fish Tank