Atlantic cod, as its name indicates, inhabits the icy waters of the Atlantic Ocean. These seabed predators, can reach up to six feet in length and live over 20 years. 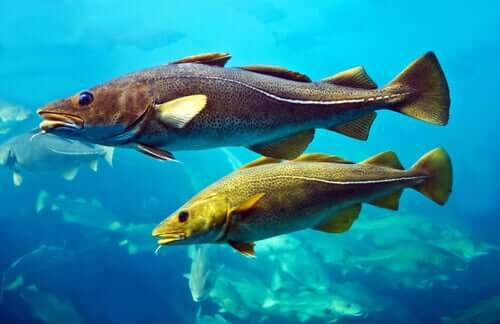 The Atlantic cod is a marine fish species. People also know them as Norwegian cod. They mainly inhabit the coasts of northeastern North America and Greenland, as well as the waters of the Atlantic Ocean near Iceland and the North Sea.

It’s worth noting that Atlantic cod can live over 20 years in their natural habitat. Likewise, the average size of an adult cod is 4 feet, although there are records of specimens about 6 feet in length.

Not all cod are of the same color although they’re all part of the same species. The type that inhabits waters with denser algae usually has a skin color that varies between sandy red and greenish-gray.

On the contrary, the cod who live on the seabed, at greater depths, and in colder waters, are usually pale gray in color. In any case, all cod have a darker color along their spine than on their belly, where they tend to be paler.

Atlantic cod usually live near the seabed, in a fairly wide range of habitats. From the coast to the continental shelf, this animal is up to 2000 feet deep in coastal waters. Cod are also found in the open sea, in waters with temperatures between 32 and 60 degrees Fahrenheit.

These fish reach reproductive age between the age of two and three. However, there are records of populations living further north. These ones usually reach sexual maturity between five and seven years of age. According to some studies, cod reach sexual maturity much earlier now than they did 50 years ago. In addition, they’re also smaller in size.

Reproductive habits of the Atlantic cod

There’s not a lot of information about the reproductive behavior of cod. To this date, the information gathered by researchers shows behavior that’s not completely uniform among every type of cod.

A common feature in the reproductive behavior of all types is the production of sound by males. Cod have strong percussion muscles with which to make music. They’re located near the swim bladder. Even though these muscles are present in both males and females, only the males use them for reproductive purposes.

The study of these sound patterns allowed researchers to determine that males with more powerful sounds are usually those who successfully mate. The larger the fish, the bigger and stronger their percussion muscles, and the more attractive they are to a female.

According to a study on cod behavior, the females are the ones who select a partner during the mating season. It’s for this reason that males swim in circles around females emitting their sounds. In addition, they usually show aggressive behavior among themselves to demonstrate superiority.

Unfortunately, the human impact on the ocean has seriously affected the cod population. The sonic pollution produced by the exploitation of the seabed prevents the proper resonance of the sound patterns in the cod. Consequently, reproductive patterns are now unbalanced.

Atlantic cod are migratory animals. They move to warm waters when it’s time to reproduce. Cod can reproduce at any time of the year, but they usually do so in warmer waters in late winter and early spring.

Atlantic cod communities are hierarchical according to size. Probably because their size is directly related to their age.

The larger communities often have leaders who guide the group on the migration route. Some biologists even suggest that young cod learn the migratory routes from the elder fish.

They reached this conclusion after observing communities who lost most of their old fish and, consequently, their leaders. In these communities, the migration routes markedly changed.

The Atlantic cod is currently labeled as vulnerable on the IUCN Red List of Threatened Species.

The fauna of the Great Barrier Reef
There are many endangered species that live within this ecosystem. It's 1600 kilometers are protected by law.  Read more »

Fish
The Current Situation of Freshwater Fish in Spain

Although you can confuse saltwater fish with freshwater fish at first glance, they’re very different species. Their bodies have different…

Not all animal centers exhibit animals or keep their inhabitants imprisoned. In fact, there are some recovery centers that house…