Differences Between Crabs and Velvet Crabs

In addition to their colors and sizes, there are more differences between crabs and velvet crabs that can help us distinguish between the two. 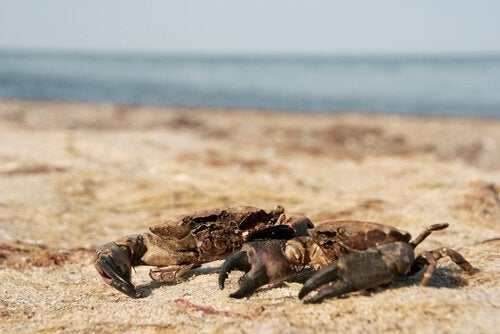 Characteristics and general info about crabs

The term ‘crab’ refers to the different species that belong to the decapod family. This family includes crabs, as well as other crustaceans like lobsters, shrimps, and prawns.

Currently, there are more than 4,000 recognized crab species on every continent except Antarctica. There’s a lot of diversity among all of these species, in relation to their appearance, habitat, and life cycle.

In general, crabs can be divided into two groups according to their habitat: crayfish (Astacoideos) and sea crabs (Brachyura). The vast majority of crabs live in or near water, but some species only enter the water during the breeding season.

For many experts, the common feature among all these species is their benthic character. Benthic animals are those that live and wander along the bottom of aquatic ecosystems (both freshwater and saltwater) at varying depths.

These crustaceans aren’t usually good swimmers. Instead, they use their legs to move along the bottom of the body of water where they live. Additionally, they have sharp claws that they use to catch prey and defend themselves.

Velvet crabs (Necora puber) are decapod crustaceans that belong to the Bradenura order. That means they’re one of the species commonly recognized as sea crabs.

More specifically, we’re talking about a medium-sized crab that lives in shallow saltwater areas. Generally, they live near the coasts and live among rocks to protect themselves and catch their prey.

They’re known for their hexagonal, blue shell that has brownish, velvety villi. In addition to that, they have very prominent red eyes and several red protuberances.

The velvet crab’s diet is based around dead fish, algae and other organic matter in its environment. Octopuses are their main natural predators, but humans also hunt and catch them.

Its meat is highly sought after for gastronomy because of its delicate texture and pleasant taste. Velvet crab dishes are part of the traditional cuisine of the coasts of the Cantabrian Sea, including the Spanish regions of Galicia, the Basque Country, Cantabria, and Asturias.

Similarities and differences between crabs and velvet crabs

Now that you know a little bit more about each animal, you can see that there are many similarities and differences between crabs and velvet crabs. Of course, the similarities aren’t very surprising since they’re both species of crabs.

It isn’t a coincidence that crabs and velvet crabs look alike; they’re related morphologically and genetically. Remember, not all crab species share so many apparent similarities with velvet crabs due to the great morphological diversity among these crustaceans. However, they all come from the same order within the vast animal kingdom.

If we compare the velvet crabs to the crabs that are traditionally served as part of Spanish dishes, we’ll see some very obvious differences. Usually, velvet crabs are smaller than regular crabs; they’re between seven and nine centimeters long. Common crabs can easily reach 12 centimeters long.

Also, there are differences in their bodies that make them easy to differentiate. While the velvet crabs have a hexagonal shell that’s broad and bluish, common crabs are mostly red and they have a more rounded shape.

If you get the chance to touch these crustaceans’ shells, you’ll notice another clear difference. The velvet crab’s shell is much smoother and more uniform, with some velvety regions. On the other hand, crabs have a rough and irregular shell.

Lastly, it’s worth mentioning that velvet crabs have black bands on their legs. This characteristic is seen in very few species of crabs, so it’s a key aspect when identifying this species.

The Horn Shark: Habitat and Characteristics
Today, we're going to tell you about a fascinating type of shark: the horn shark. Learn more about the tiniest shark species out there in this article! Read more »
Link copied!
Interesting Articles
Wild Animals
The 5 Sleepiest Animals in the Animal Kingdom