Breeding Sheep: All You Need to Know

For sheep reproduction, the estral cycle is key, and is the period in which the female accepts the male; that is, when it's sexually receptive. 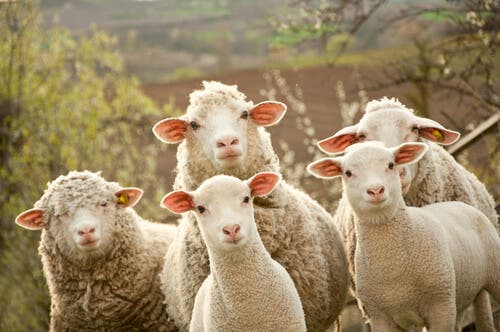 Sheep are quadrupedal, ruminant, and herbivorous mammals. Their scientific name is ‘Ovis aries’, and farmers or shepherds raise them in several different countries around the world, with different purposes. In this article, we’ll talk about breeding sheep and some interesting facts about this practice.

The breeding of this type of livestock is mainly for obtaining milk and meat for human consumption. However, it also serves as a source of different organic products.

In addition, sheep can also live as pets on a farm or on some military institutions. We can’t forget about their wool, of course, as it’s of great importance for the textile industry and is an essential element for protection against cold weather.

What to know about breeding sheep

Female sheep reach puberty when they’re about five months old. However, this stage can also range from 5 to 10 months. In the case of males, it happens earlier, between three and six months.

However, for a female’s first mating, it’s necessary to wait for them to be between 8 and 10 months old. It’s not uncommon for males to try to mate with females before this period, but many breeders wait for them to turn one year old before they begin with their reproduction. In fact, precocious specimens will try it at six or seven months in the wild.

Due to the male’s early sexual maturation, experts recommend separating them from females when they’re young. In this way, shepherds may avoid their sheep reproducing with blood relations.

The estrous cycle (a mammal’s fertile period) is the period during which the female accepts the male. In other words, this is the period when she is sexually receptive.

During this time, hormonal changes that are necessary for the female to be fertilized occur. However, we should add that, although sheep have several estrous cycles in the year, these will depend on the seasons.

Breeding sheep according to the season

There are several factors that can influence a sheep’s reproductive cycle:

In this sense, the photoperiod (the time of the day when the animal is exposed to light), determines the sheep’s reproductive cycle. Depending on the amount and duration of the exposure to light, the female’s ovaries will start their ovulation process.

In the case of sheep, their reproductive period occurs when days are shorter. In other words, when it gets dark earlier. Moreover, this has to do with hormone production that is the result of daylight exposure.

This factor is important in order for females to give birth in favorable climate conditions, usually during spring. Moreover, this is a way to ensure that the young lamb’s chances of survival will be higher.

How to recognize when a sheep is in heat?

When breeding sheep and during a sheep’s reproductive cycle, the following signs should be observed:

If these characteristics are present, then the sheep is probably in heat.

Its gestation period lasts approximately five months (between 145 and 153 days). During this time it’s important we observe the animal’s feeding, as it requires a little more food than usual. Therefore, it’s ideal to add grains and cereals to their daily diet. However, while the amount of food needs an increase, you shouldn’t overdo it either. It’s not good for them to gain too much weight.

On the other hand, it’s advisable to separate the pregnant sheep from the other animals to avoid beatings and mistreatment. In addition, you would also be reducing the risk of miscarriages.

Normally, you can recognize when a sheep is about to give birth when it separates itself from other animals. In addition, it will be restless and will lose its appetite.

A sheep’s birthing process is called ‘lambing’. To start with, the cervix begins to dilate and the birth canal is prepared for delivery. Its vulva will become inflamed while turning red and its skin will become loose. Next, uterine contractions will increase. Eventually, a large ‘water bag’ will appear, break, and expel the water. After a while, the young lamb will start to get expelled.

Usually, a sheep’s lambing is a process that doesn’t require much intervention. However, if the lamb isn’t well placed, human help is fundamental for its birth. The shepherd, or the person caring for the herd, must wash his or her hands thoroughly, insert one of them into the sheep’s vulva, and carefully accommodate the unborn lamb.

Finally, after the sheep has finished labor, it will need to be given some fresh water. In general, as we’ve said before and as we’ve observed, the sheep’s reproduction process hardly requires human intervention. It still is, nevertheless, a wondrous and amazing event: the cycle of life.

All About Sheep Shearing
Sheep shearing isn't just part of the wool trade, it's also an important part of keeping these animals healthy and preserving their well-being. Read more »
Link copied!
Interesting Articles
Sheep and Goats
Seven Causes of Abortion in Small Ruminants

Sheep and Goats
All About Sheep Shearing

Sheep shearing isn't just part of the wool trade, it's also an important part of keeping these animals healthy. Anyone raising sheep needs to do this to preserve their well-being.…

Sheep and Goats
Caring for Goats: 4 Things You Need to Know

Caring for goats can be great fun. Many people buy goats for their milk or because of how effective they…