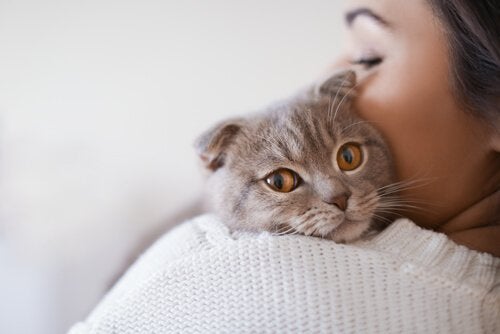 The main form of transmission for the feline leukemia virus is contact with the bodily fluids of another infected cat. It can be deadly.

Between 2 and 15% of the global feline population will contract this disease at some point in their lives and on many occasions their owners don’t even notice it. Therefore, knowing the causes and symptoms of this fatal and contagious disease is important for prevention and treatment.

A retrovirus is composed of single-stranded RNA. This virus replicates through the action of an enzyme called reverse transcriptase, which enables the conversion of RNA into DNA which can be subsequently be placed inserted into the DNA of the host cell. Once implanted, the virus can multiply.

Contact with another infected cat’s bodily fluids is the main form of transmission of the feline leukemia virus. If one cat bites another or comes into contact with infected saliva, urine or feces, the transmission is immediate. A mother will also infect her young through her breast milk.

Cats that are at greater risk of infection are those exposed to other infected cats. This virus is quite common in cats that escape from home and socialize with other stray cats or simply live with other non-diagnosed animals in the same home.

The disease begins to appear months and even years after the cat has been infected, which is why it’s common for owners not being able to treat it until it’s too late or until the infected animal has infected more animals. During its initial stages, you can observe the following symptoms:

To diagnose it, veterinarians usually run two tests that detect the a protein component of the virus called FeLV P27. The first one, called ELISA, is usually used as the first screening test. Identifying it early goes hand in hand with periodic veterinary check-ups.

If this first test is positive, then the second test, called IFA, is conducted, which confirms the diagnosis and determines the stage of the disease. This final test detects viral particles in the lymphocytes, which usually takes place when the pathology is at an advanced stage.

Currently, there is no definitive cure. Certain therapies are successful at reducing the amount of viral particles in the bloodstream. However, as in most major cancer treatments, their side effects can be devastating.

The only way to guarantee your cat’s well-being is by asking your veterinarian for palliative care in order to counteract the symptoms or prevent it if your cat is healthy. One way to achieve this is by keeping the cat protected inside the house, where it does not run the risk of coming into contact with infected animals.

There is a relatively effective, but not definite vaccine that can reassure owners who know in advance that there are infected cats in the neighborhood. However, it’s not normal to find vaccinated cats, so avoiding early exposure is essential.