Sometimes, difficulty and pain can bring two friends together 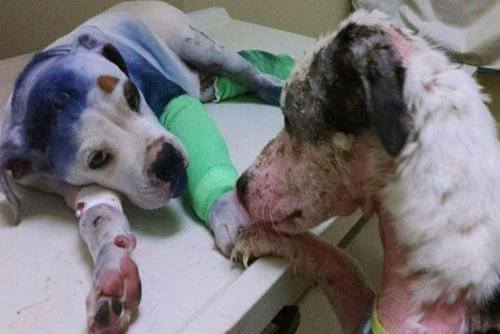 Today we are telling a story that proves friendship has no limits. In fact, some misfortunes have a bright side. This is the story of Sammie and Simon. Sammie and Simon met in a situation that was extremely unpleasant for both of them. But, a beautiful friendship emerged.

Sammie is a 4-month-old boxer puppy. It is unknown whether or not he had an owner. Perhaps, Sammie was one of the thousands of abandoned dogs around the world.

Sadly, someone took advantage of this beautiful puppy of merely four months. They painted Sammie with a blue spray and shot him in the head and the legs.

Then, they dragged him with a car. At this point, everyone assumed he was dead. We have no idea why someone would do something like this. But, we want justice to be served to these abusers.

When the New York Rescue Dogs Rock NYC Protector heard about Sammie’s extreme situation, she immediately requested help from the Paws & Claws Clinic. This clinic which is located in the same city. Both took responsibility for the animal, who had already been fighting for his life for several days. Unfortunately, the wounds were tremendously severe.

However, something happened that Sammie couldn’t have imagined in a hundred years . . . He made a friend!

Simon is a puppy that, unfortunately, was also an abuse victim. Simon is a beautiful 4-year-old Border Collie that someone, we are unsure of whether it was his owner or someone on the outside, was mistreating by causing large tears in his skin that have put him on the edge of death.

As has been the case with many other dogs, the Rescue Dogs shelter also took responsibility over Simon’s health, who has been hospitalized for several weeks and is recovering progressively.

Even on the skin of his face, you can see the signs of abuse. His face is scarred, but his eyes gleam with happiness after having found a place where someone takes care of him and treats him lovingly and patiently. And the best part was something he surely did not expect . . . Finding a friend!

Why do you have a friendship with a certain someone? Surely you had hundreds of people to pick from to form your friendship, but you chose one of them expressly. This happened because that being has something that is attractive to you, which brings positivism to your life and knows how to get the best out of you.

Those could very well be the same reasons why Simon approached Sammie. Among dozens of dogs that were hospitalized, Simon saw Sammie and could not keep from approaching him.

Since meeting each other, even though Sammie still can not walk and is lying in a bed, Simon goes to see him whenever he can and spends hours with him. They simply look at one another, but because of what is displayed in the images, we know for certain that they speak with their eyes.

Sammie’s sad expression is beginning to transform, concluding that Simon’s friendship benefits him in a profound manner.

Both dogs have created a beautiful bond that is helping them move to forward, be happier and have the strength to recover. Sammie and Simon’s story of friendship and unconditional love is one that has filled our eyes with tears and our hearts with joy.

They say that love heals everything. Will this be true in Sammie and Simon’s case? Surely, the answer is a resounding yes!