Guacharaca, The Dog Who Wrote a Book 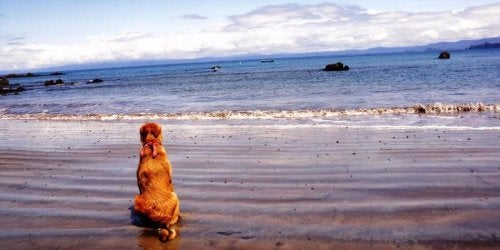 Linda Guacharaca was a Colombian street dog who lived in a gas station. Like many dogs, Guacharaca went through many hardships and had difficulties finding food, water, and shelter. She depended only on the charity of travelers or other people who stopped there. That was her lifestyle before she became an author. This article will tell you all about her story.

One day, the future dog author was hit by a car. The accident left her with four broken legs and a fractured hip. Guacharaca was greatly wounded and was unable to search for food and water.

Fortunately, a Spanish lady named Yamila Facuri was passing by on the freeway and he noticed her. Guacharaca was already in critical condition, dehydrated and on the brink of death. She hadn’t had anything to eat.

The dog author is adopted

However, Yamila wasn’t sure about keeping the dog at first. She wasn’t used to taking care of another being. So she started taking the first steps to give her up for adoption. However, as time passed, she fell in love with the dog and the both of them were inseparable.

Due to the circumstances they were living at the time, Yamila felt that she should write about what she felt about Guacharaca’s situation. So, she decided to write a blog from the dog’s perspective. Guacharaca would be the writer and Yamila would be the assistant.

Over time, the blog stated to become popular. Then Yamila started writing a book. Since she couldn’t find a way to finance the project, she began to use crowdfunding, which got her independent funding to publish the book.

There were a total of 1000 copies from the first edition, which was completely financed by crowdfunding.  The second edition was published at the International Book Fair of Bogota (FILBO), where Guacharaca gave autographs her paw-print instead of a signature.

This dog has created a lot of excitement worldwide, especially in Latin America. Her fame lies primarily in being the first dog writer, and secondly due to such an impact her book has made.

“Life is Beautiful” is the title of the dog’s book. The book narrates Guachara’s rescue, her feelings, what took place afterwards and confronting life from her point of view.  The book contains humor and struggles. It constantly makes the reader think about a street dog’s point of view and how love can overcome any hardship.

Currently, the writer is a model, blogger, weekly columnist in the magazine “4 Paws”, and an activist for change with a new perspective. Guacharaca shows us the beauty in everything through her eyes, with the help of her assistant and through many trips around Colombia and Europe.

Many animals with special talents or exceptional circumstances have become the face of advertising campaigns.

Buddy Mercury is a beagle who became famous because of his YouTube videos of him howling while playing the piano. The American puppy went viral ever since his owners uploaded the first video of him doing a show while he sang and played the piano. This amazing dog would wag his tail and look into the camera as if he had an audience.

Nathan is a hairless Chinese crested dog who became viral on the internet by dancing to the rhythm of his owner’s music. This puppy lived the first 4 years of life in foster homes, until someone in South Carolina happened to adopt him and discover his new talent.