Hiccups In Dogs And Cats: How To Get Rid Of Them

Hiccups can be caused by a cold, stress, stomach disorders, or even eating or drinking too fast. To get rid of the hiccups, there are some simple tricks. 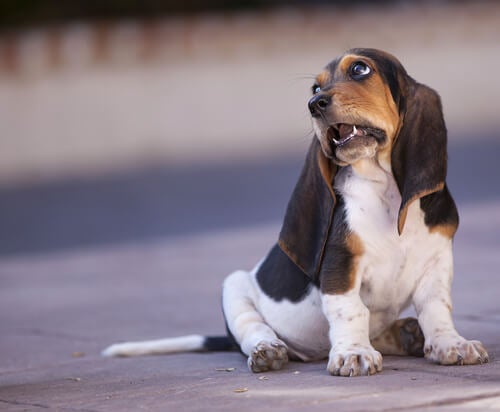 Hiccups in dogs and cats are usually caused by a spasm in their diaphragm. This happens mostly in puppies. It usually isn’t a symptom of any serious disease, although it can cause them discomfort.

Hiccups usually don’t last more than a few minutes. If they are having a long episode of hiccups, most likely they are also experiencing other symptoms, such as nausea or coughing. In such cases, it is best to check with your veterinarian.

Hiccups in dogs and cats actually start as of being inside their mother’s womb. As the pup or kitten gradually forms,  the lungs begin to develop.

When the fetus develops, it hiccups in the uterus, which is a way to exercise the diaphragm. In fact, hiccups are defined as an involuntary contraction of the diaphragm.

It’s completely normal for a puppy or kitten to have hiccups. This only becomes worrisome when it happens excessively.

Hiccups in dogs and cats can be caused by several reasons:

Are hiccups in dogs and cats uncomfortable?

Really, hiccups don’t hurt the animal, the same way they don’t hurt humans. However, if the hiccups are symptomatic of a breathing or digestive problem, then they could be signal of something more serious.

It’s not advisable to scare your puppy as a way of treating hiccups. Remember that he might be feeling stress or anxiety. If so, scaring him might only make his condition worse.

The best way to get rid of hiccups is to distract the puppy, pet him and try to help him relax. Once he relaxes, he should be able to breathe normally again.

What will happen as your puppy grows? Typically, your dog should stop having hiccups as his body develops and grows.

When eating, dogs and cats change their breathing. Something as simple as drinking water can help get rid of hiccups. Most people do the same thing when they have the hiccups.

If you have run out of options, you can try scaring your cat or dog. This causes the animal to exhale extra air, which can help relieve hiccups.

In order to do this, make sure the animal is calm. If your pet has frequent aggressive reactions, then this is not the best technique to try.

Starting to play a game with your pet is a good option, even if it’s not entirely effective against hiccups. This helps distract the animal in order to get him to concentrate on something else and ignoring the hiccups.

You can also change their breathing pattern by playing. This sudden change in activity and breathing helps get rid of the hiccups.

Although baths are not usually a favorite among cats and dogs, they can help get rid of hiccups.

When you bathe your pet, this usually causes a strong reaction inside them, which causes a change in breathing and a slight episode of shock due to interrupting their routine.

Are there any advantages to having hiccups in dogs and cats?

The main advantage of hiccups is the release of gas from the stomach, along with the irritation gas can cause.

Hiccups can help animals get back to their normal state if they are suffering from digestive issues. Another benefit of hiccups in dogs and cats is that it can correct a loss of coordination between the nerves of the diaphragm.

If your pet is inhalation rapidly through their nose with noise and difficulty, this may be reverse hiccups, also known as reverse sneezing.

The animal needs to get rid of mucus in its nose. Although the cause of reverse hiccups in animals has not been proven, it’s generally associated with respiratory problems, sinusitis, etc.

No matter what, it’s still best to take your pet the vet.